The story of how Jim Siegel bought the landmark Victorian is a long, strange trip

When Jim Siegel was just eight years old, he saw his first episode of The Addams Family, and fell in love during the opening sequence. Not with the "creepy" and "kooky" characters shown snapping their fingers in a staccato cadence, but with the gothic Victorian house pictured in the first frame. Siegel, watching in his parents' suburban ranch house, was smitten.

"I was obsessed with that show and the house," he says. "I think it was because the family and their home were quirky and different. Even back then, I knew I was gay, and I felt different from everyone around me — maybe I identified with it."

He was still a boy when he saw the Westerfeld House, a Stick Italian Villa in Alamo Square, from the window of his parents' car. "To me, it looked like the Addams Family house," he says. 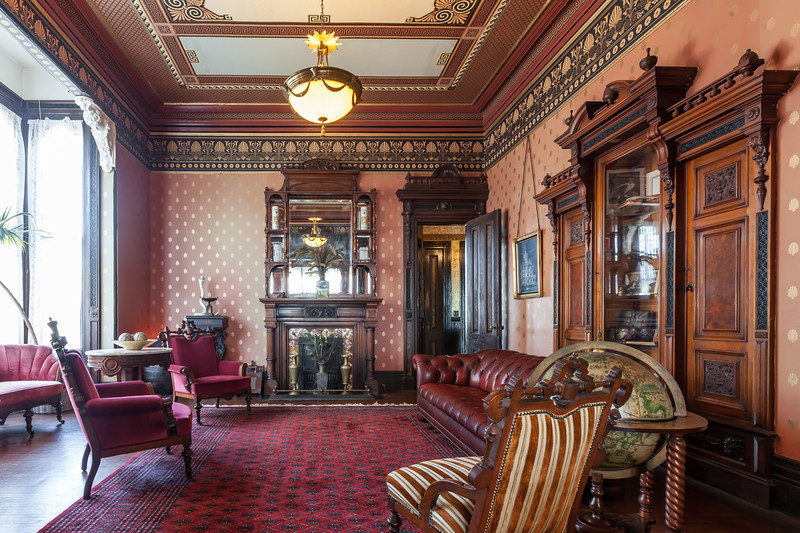 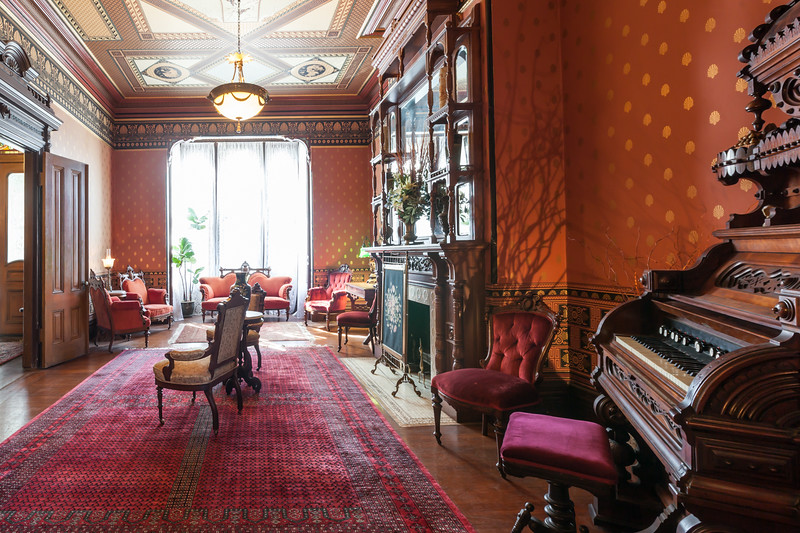 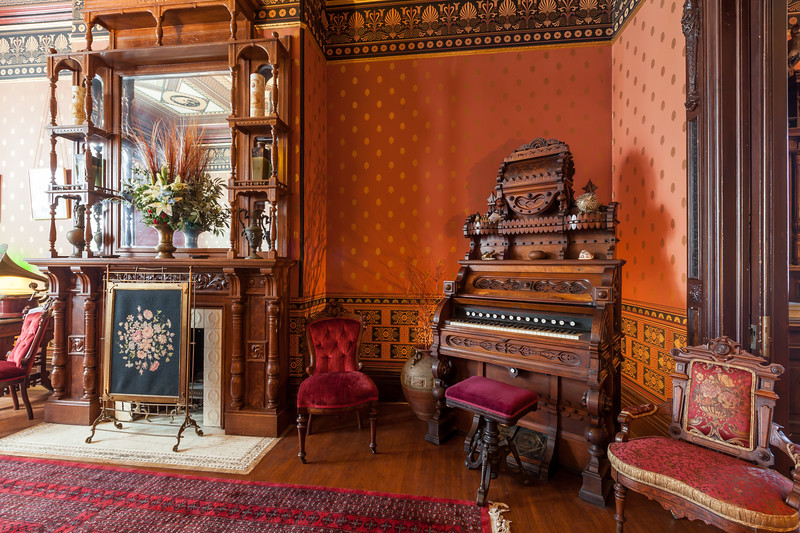 As a teenager living in Haight-Ashbury, his fascination with the place turned into something like fate during an LSD trip. "I saw myself owning this house, and it all came together for me how I would do it," he says. The drug-induced vision turned into a real estate development career.

The plan to acquire the house involved buying other Victorian buildings and fixing them up. It may sound like a somewhat logical thing to do in San Francisco 2016, but in 1976 it was a crazy idea. "Very few people valued Victorians at that time," he says. "They were mostly crumbling in what were then rough parts of town. The city was tearing them down blocks at a time, making way for new developments." (Siegel had a friend who worked for San Francisco Victoriana— a now closed supplier of historically accurate molding — and together they would go into demolition sites and scavenge doorknobs, doors, trim, mantels, and anything else they could drag away. It was the start of Siegel's huge collection of architectural salvage, and it plays a part later in the story.)

Siegel scraped together money by operating a head shop in the Haight (he's owned a few, but currently runs Distractions as an "eclectic emporium" with a steampunk bent) and bought his first Victorian on Tennessee Street in Dogpatch for just $10,000. "Back then, it wasn't the neighborhood it is today," he says. "Many of the roads were dirt." It was the first in a series of similar purchases that ultimately led to the acquisition of his dream house.

A decade later, he bought the Westerfeld house at a foreclosure auction on the steps of City Hall by the skin of his teeth (he had to quickly sell three of his properties in tricky deals to do it). The purchase price was $750,000, which at the time seemed like a ridiculous sum. "But it felt great to own it," he said. "It was like it was meant to be."

At the age of 30, Siegel found himself with a house filled with hundreds of repairs that needed to be made — and a lot of colorful and wild history. The stories begin in 1889 when it was built by William Westerfeld, a German immigrant who owned bakeries and candy confectionaries. "When he built it, legend has it he commissioned the tower to one-up his brother, who had a house on Nob Hill," he says. "Back then, you could see the ships coming in on the bay from the top of the house."

For the next 97 years, it seems the house attracted a remarkable number of unusual characters. In 1928, it was purchased by Czarist Russians who ran a nightclub called "Dark Eyes" in the lower level ballroom. In the 1940s it was converted into a 14-unit apartment building and become a way station for jazz musicians, including saxophonist John Handy. In the 1960s, a series of communes occupied the house, and it was written about in Tom Wolfe's The Electric Kool-Aid Acid Test.

During the commune years, filmmaker Kenneth Anger lived and made movies here, and satanism was a central theme in his work. Church of Satan founder Anton LaVey and his pet lion were frequent stars in the films, as was house resident and Manson Family member Bobby Beausoleil. (It's been rumored Charles Manson lived here too, but he was merely a visitor.)

The last commune to occupy it was a group called the Family Dog. Members staged rock shows at the Avalon Ballroom, and musicians from the Grateful Dead and Big Brother and the Holding Company used it as a hangout. 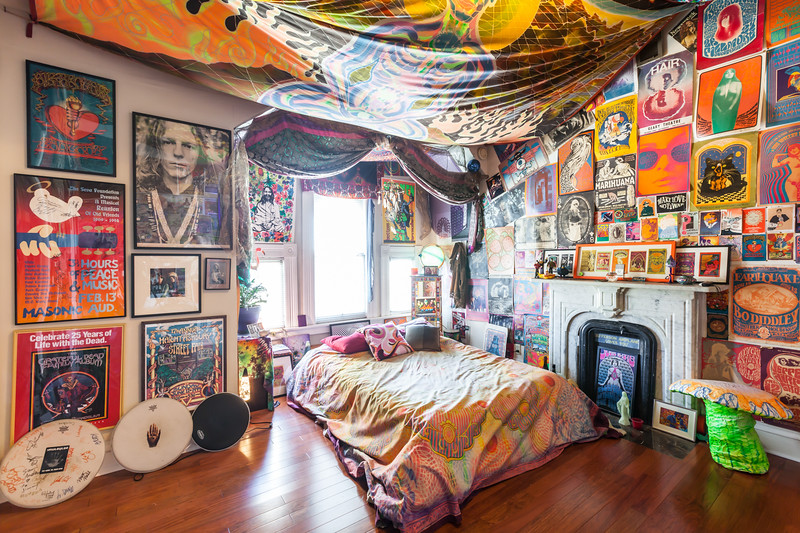 In the 1970s, it was purchased by a couple who made improvements Siegel categorizes as "misguided," but they helped save the house from the urban renewal projects that were sweeping around the district. They sold it to another couple who operated it as a bed and breakfast before Siegel purchased it.

"One of the first things I did was have it blessed by Buddhist monks," he says. "The satanist stuff kind of freaked me out."

After that, his restoration efforts began. Over many years, many owners, and many more occupants, the original molding and trim on the first floor had remained in place. Siegel augmented it with Bradbury & Bradbury wallpaper and period furniture. Victorian settees and chairs are notoriously uncomfortable, but when asked about it, Siegel scoffs. "I'm comfortable in it," he says. "What makes me uncomfortable is modern furniture. 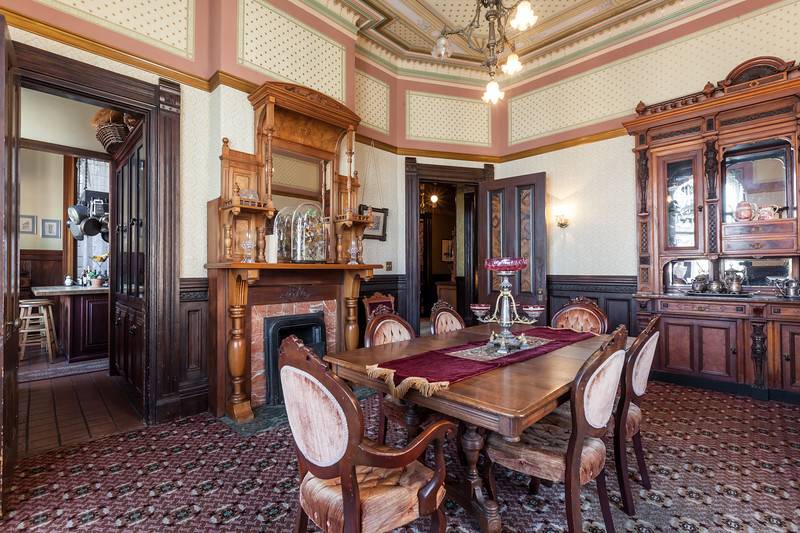 After that, he renovated sporadically, doing most of the work himself (he became a licensed contractor) and doing the rooms as he could. "I didn't really have a plan," he says. "I would just pick a project, finish it, and start another. Back then, I was a workaholic. I would get up and work on the house, go to work at the store until time to close, and then go work at the I-Beam nightclub until it closed. If I wasn't working, I was sleeping. Working on the house was my hobby."

He's worked his way through all 25 rooms, and he's still not done. "It's never finished, just look at that," he says pointing out a bit of peeling paint. "And the upkeep is never ending. When I heard you were coming over, I decided to vacuum and it took me four hours." (So much for the romance of living in a grand Painted Lady.)

But Siegel's efforts aren't going unnoticed. Before tour busses were banned from the neighborhood, the house was a daily stop ("They would say some pretty crazy stuff," Siegel notes. "Some guides would say Eddie Murphy lived here"). Now the admirers come on foot, and if Siegel should venture out on his front steps he's peppered with questions and compliments. Hollywood has come calling as well. Siegel now regrets it, but he turned down film crews from Interview with a Vampire. ("At the time, I didn't know who Brad Pitt was," he says.) He said yes to Sense8, and several episodes will be recorded there. Local filmmaker Matt Alavi is making a documentary on the home's history, House of Legends, that will debut this fall.

As for the future of the house, Siegel plans to preserve and protect it during his lifetime. Noting that it's worth millions, he says that his heirs selling it to someone who would convert it to condos is a possibility. "I'd like to see it become a house museum, like the Haas-Lilienthal House," he says. "For me, it was never about the money. It's always been about the house, and my love for it."