When stepping inside, it feels like you're walking into a newly furnished home in the late 1960s

You could say that Julian Goldklang and Desiree Myers started furnishing their unique round house in Oakland years before they ever laid eyes on it. As the owners of Mid Century Møbler in Berkeley, the largest midcentury showroom in Northern California, they are in a good position to score the best furniture of the era.

"Before moving into our home, it had been our dream to fill a midcentury house with concurrently designed furniture," Goldklang says.

"Over the last 10 years, I've been putting away my favorite pieces with the idea that they would all live harmoniously together in a perfect, untouched midcentury time capsule home."

The idea came to fruition about a year ago, when the couple's sister-in-law told them about an interesting round house on the market in Oakland.

Shortly after they started to see it pop up on blogs, and they knew they had to visit it. 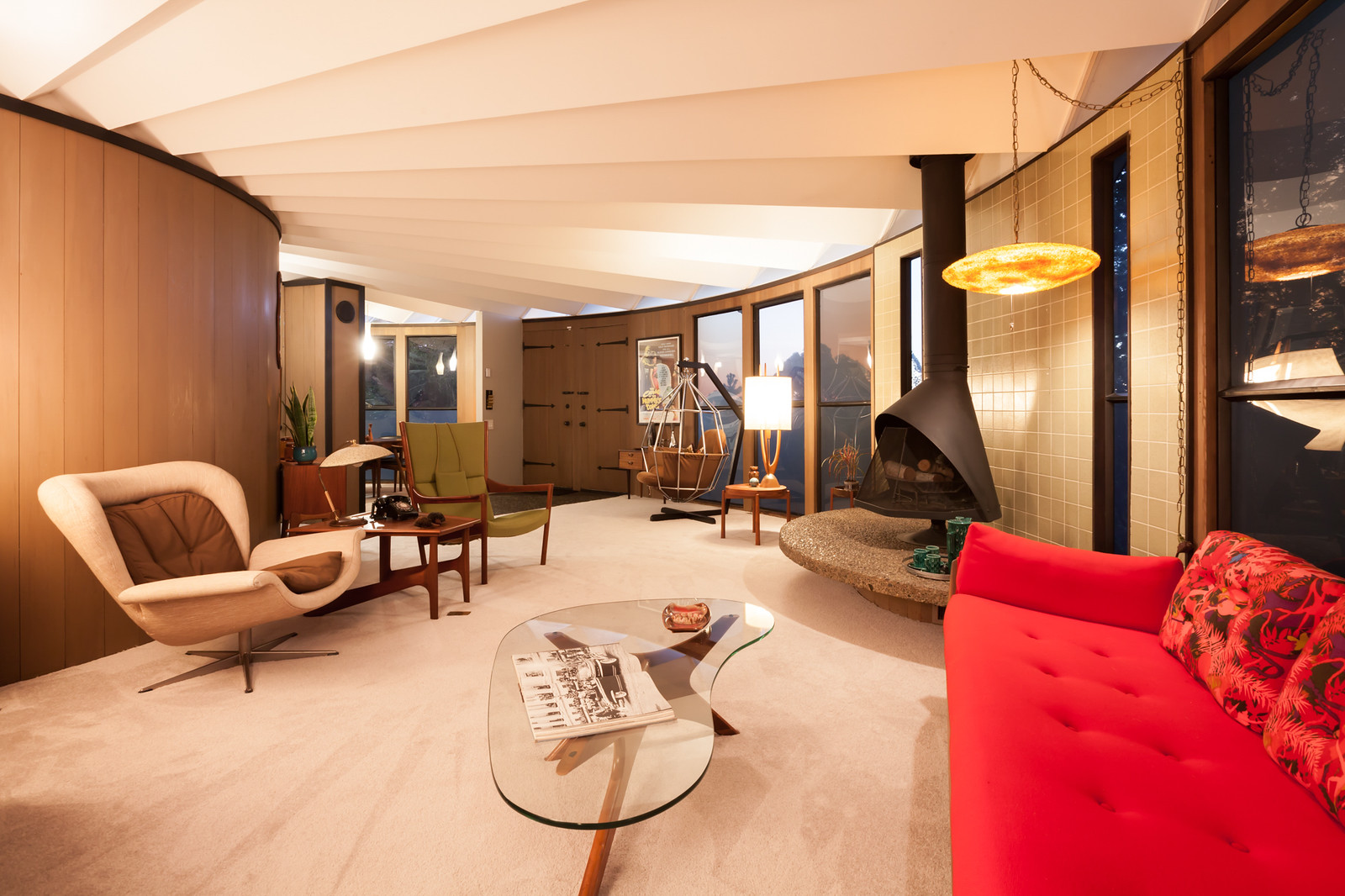 See Your Home on Curbed

Welcome to House Calls, a recurring feature in which Curbed tours lovely, offbeat, or otherwise awesome homes in the Bay Area. Think your space should be featured next? Here's how to submit.

At the time, their home and business were in San Francisco. All that began to change the moment they stepped in the front door of what's called the Nolan House, created and built in 1967 by Oakland architect Leon Meyer.

"Even though the house was packed with people coming in and out, there was a serenity to the environment. Up on a hill, surrounded by lush gardens, we felt like we had found our perfect oasis," says Myers.

"We had viewed many midcentury homes in the past that had been stripped and remodeled to the point that the interior felt hollow and dull. We were amazed to find a home with wood panelling that hadn't been painted over, with all of the original vanities and cabinetry in place, and a jaw dropping roofline to boot," he says.

Although they'd never been inside a round house before, they decided they couldn't live anywhere else. 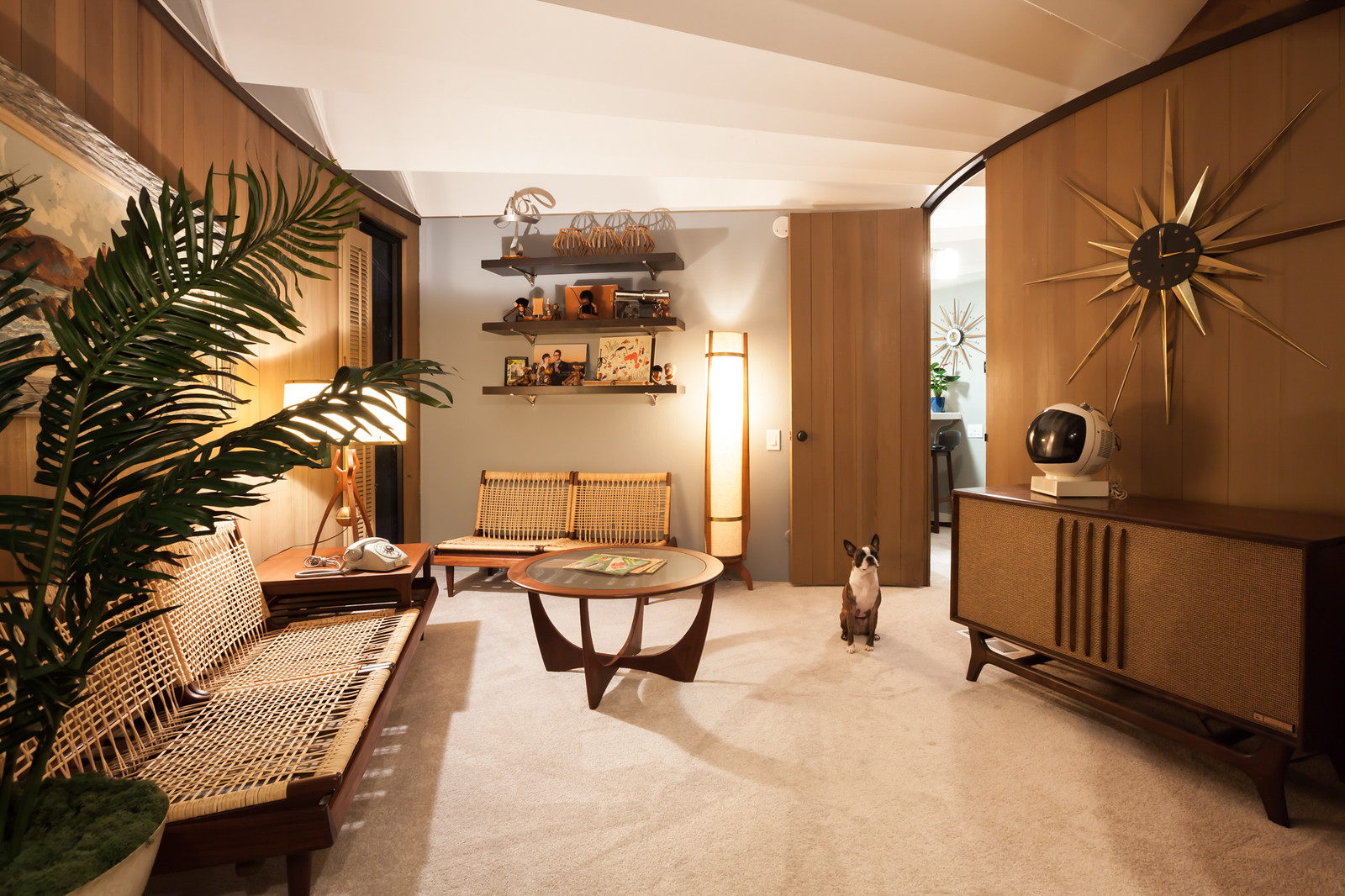 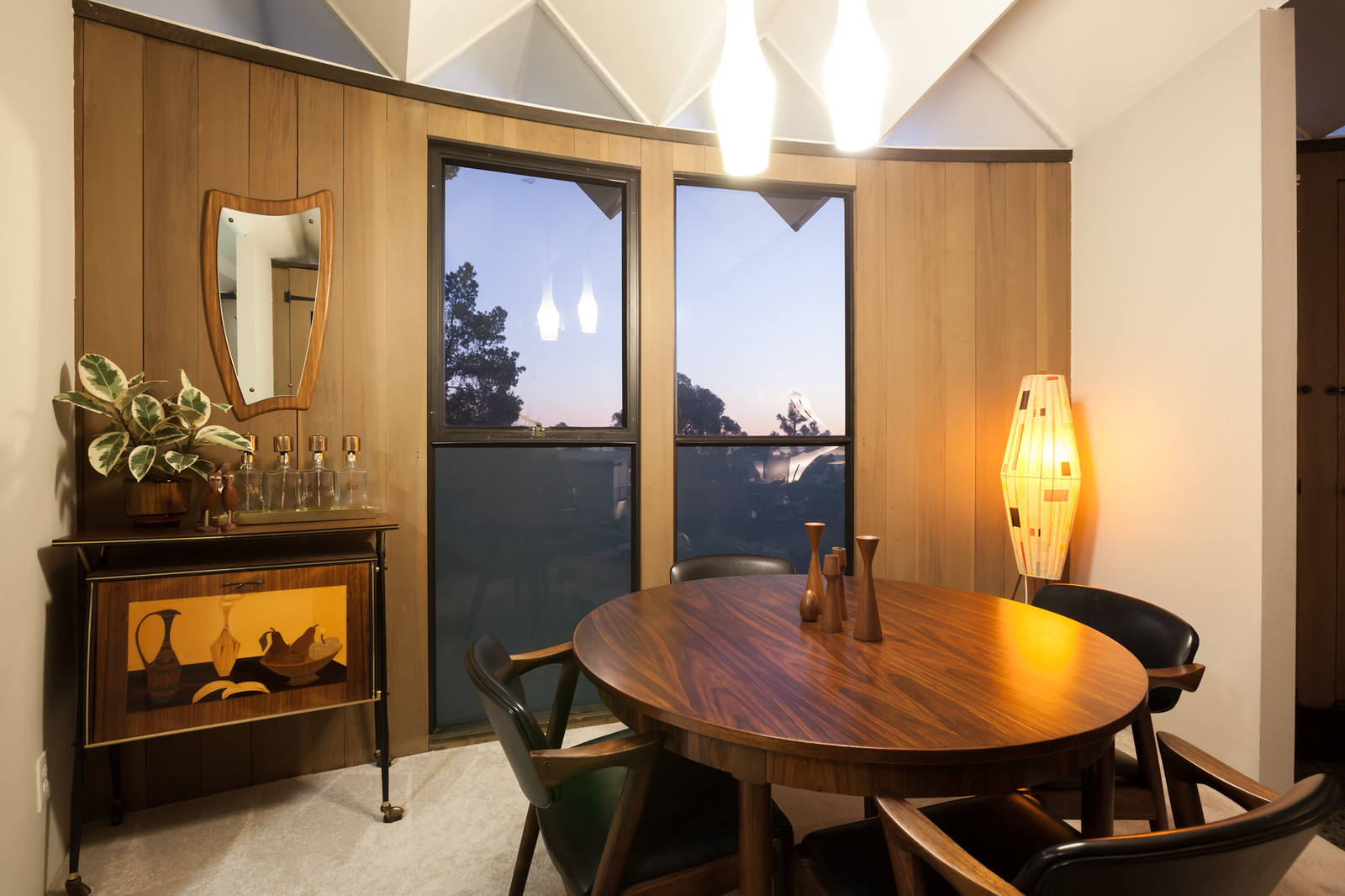 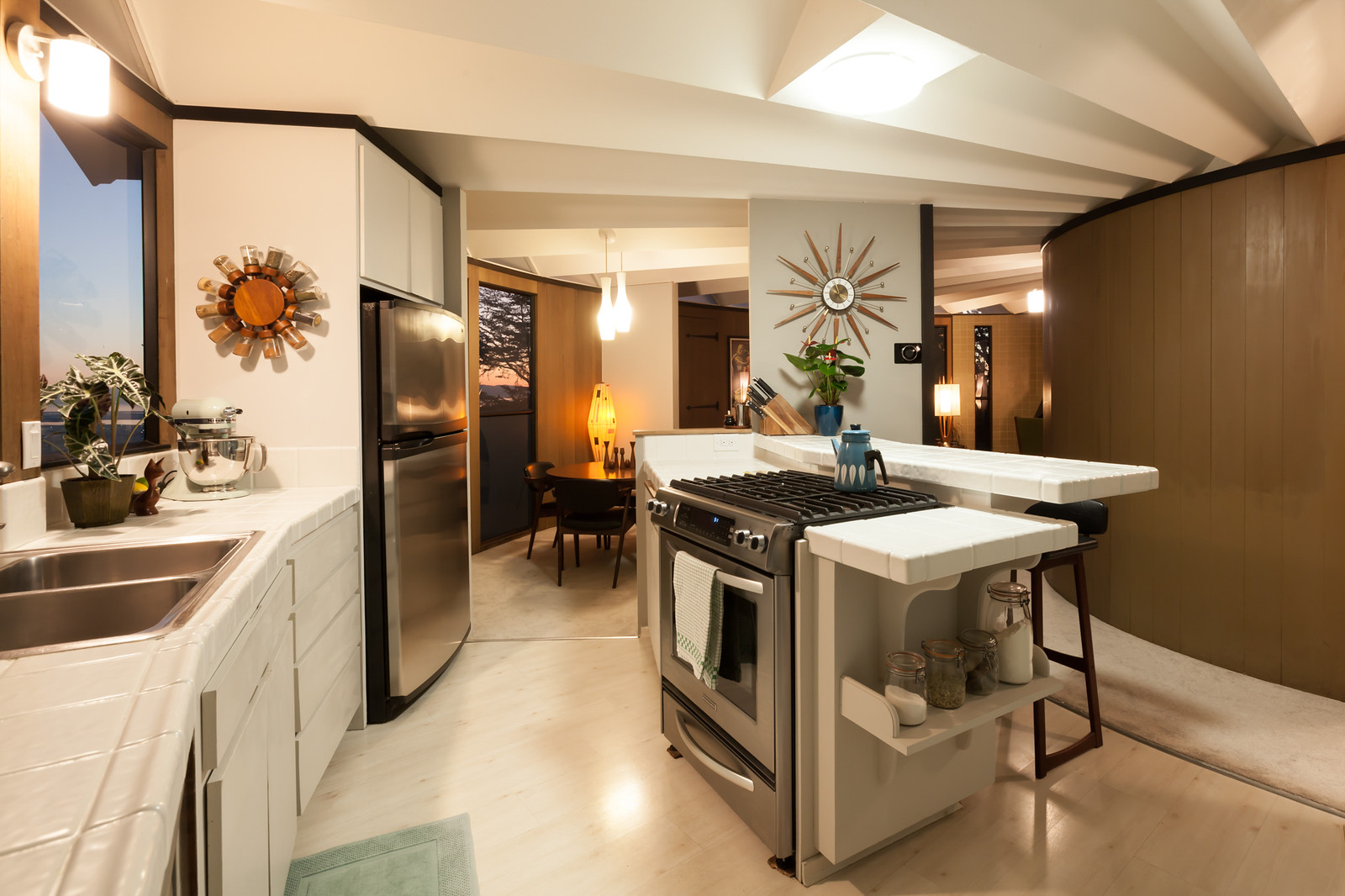 Basically, the home is a 30-foot circle. The outer part of the round is mainly composed of the public spaces (living room, dining room, and kitchen). The center houses the master bedroom. Almost all of the walls are curved, which can present an interior design challenge.

When asked how you furnish a house in the round, Goldklang's short answer is, "Very meticulously."

He and Myers have spent a lot of time figuring out where everything would go. "We've tried to incorporate as many round and organic forms into our design as possible, to compliment the original intent of Meyer's design," Goldklang says.

At first, Myers thought the home's 1,250 square feet might be a bit on the small side. But due to what she describes as an "ingenious" floor plan, they have all the room they need. 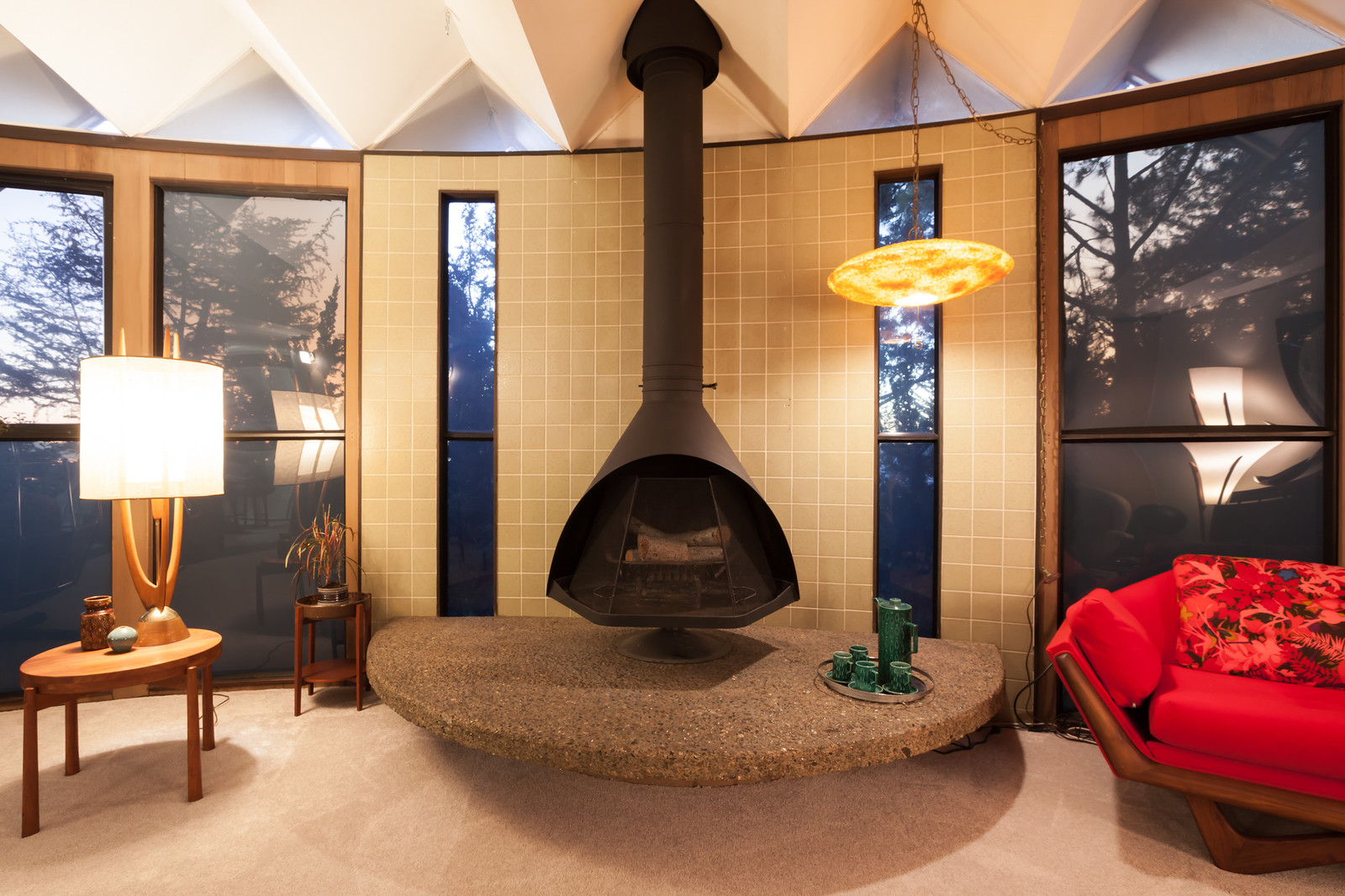 "There are no unusable areas or tight corners to navigate," she says. "The only drawback to the design is the challenge of finding the right pieces to fit perfectly in the correct spots. Not only does every piece have to fit through our doors, they have to be a particular size that works well on a round surface."

In order to make the place a true time capsule, they paid attention to when the pieces were created.

"Most of the furniture in the home was designed in or before 1967," Goldklang says. "We wanted to keep the home and furnishings original as possible to the era, so when stepping inside, it feels like you're walking into a newly furnished home in the late 1960s."

That said, they've recently been contemplating some (careful) updates. "We've started toying with the idea of remodeling our kitchen, which was redone sometime in the early 1990s," says Myers. 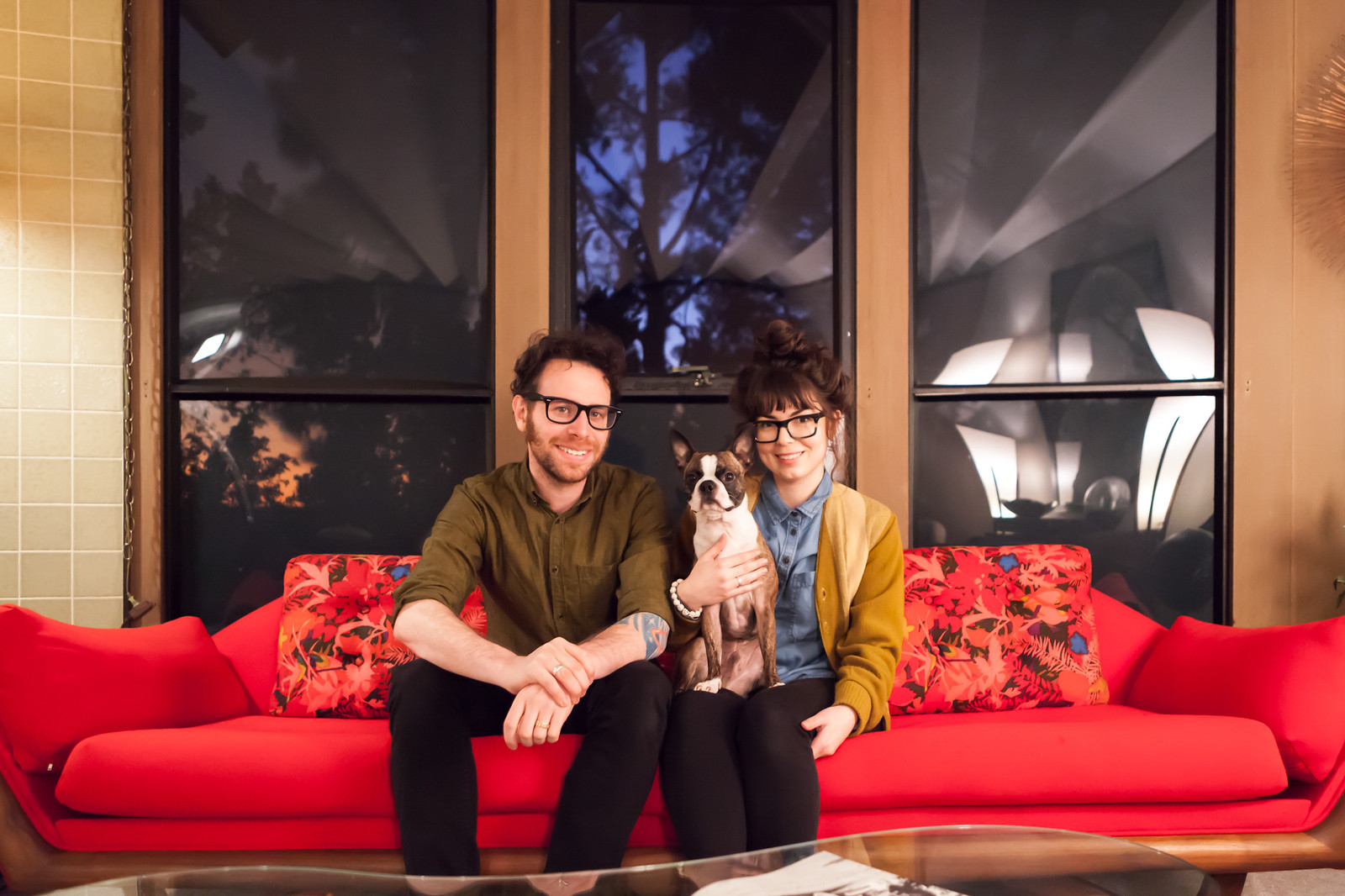 With environs like that, it's no wonder the couple chose to keep things true to the era. "I don't think we've ever considered a piece of new production furniture," says Goldklang.