"As San Francisco becomes blander, we old-timers have a responsibility to be weirder," John Vlahides, a travel writer and San Francisco Symphony Chorus member, explained as he looked out the window of his 1920s studio nestled in the Castro. His view, which once captured the bay and downtown San Francisco, now looks out onto the beige stucco back wall of Linea, the contemporary glass condo behemoth on Market Street.

And although weird can come with all sorts of affected connotations, especially in San Francisco (think cat eye glasses, tiki lamps), Vlahides, a gentleman in his own right with rapid-fire cadence and honed wit, has reclaimed the term and elevated it with a glug of storied elegance.

His two-room studio in the Castro attests to his peculiar yet cohesive mishmash of style. Located at the nexus of Duboce Triangle, Castro, and Hayes Valley, Vlahides prefers to think of his neighborhood as the Castro. 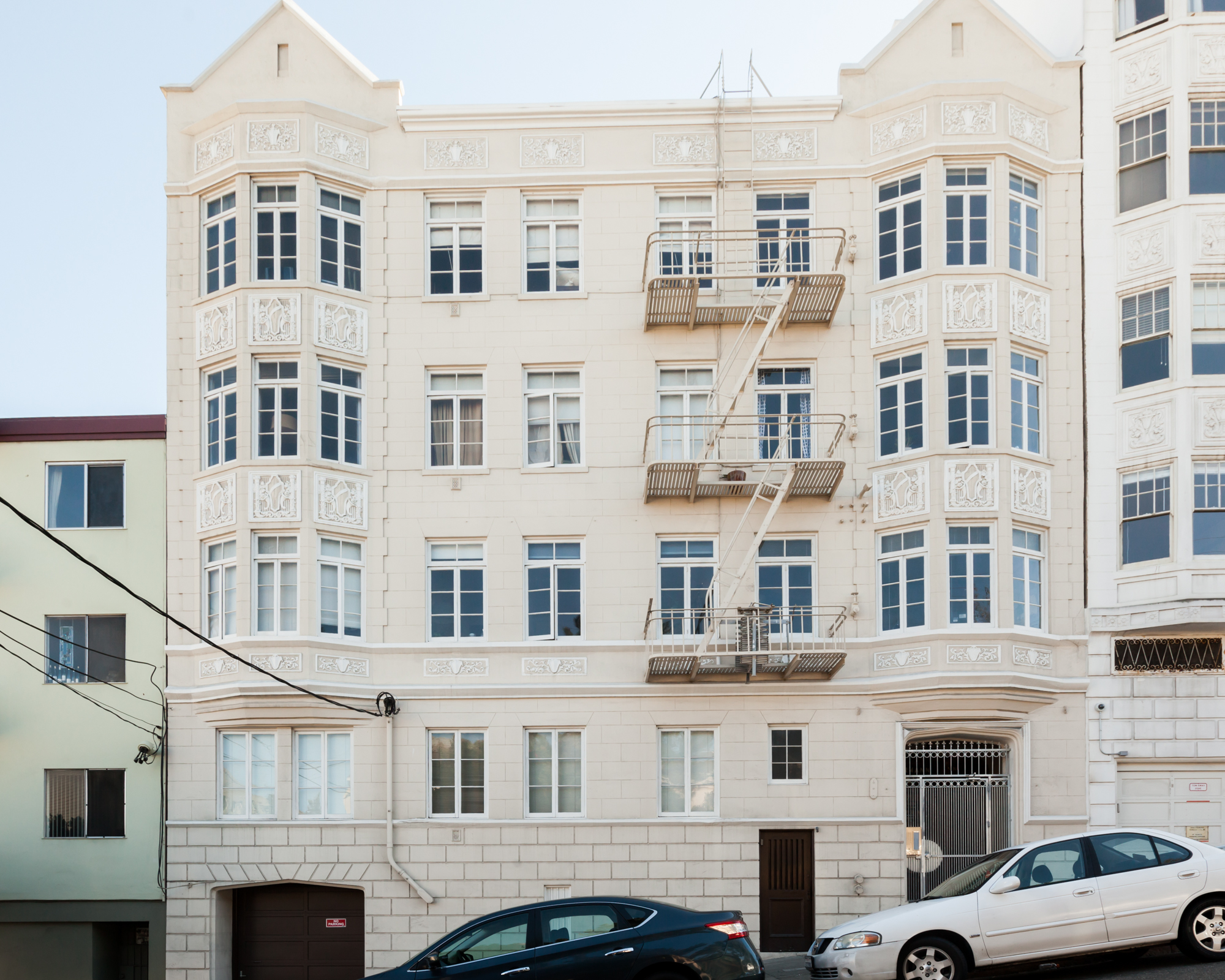 "Or Mint Hill, as some neighbors call it," says Vlahides, "Safeway Hill, if you want to be tacky."

Signing a lease back in 1993, he’s lived here for more than 22 years. "Hard to believe that I’ve lived in such a small space this long."

When asked about the rental climate back in the '90s, he says, "Most of us, before the late 1990s, were playing musical chairs; we could move anywhere in the city at anytime. But then rents started going through the roof."

Golden handcuffs are the new luxury item in San Francisco.

Though he debated moving someplace larger at the time, he couldn’t think of anywhere else he would want to live. But his biggest reason for staying at this address, Vlahides cites, is rent control. Of course. "Golden handcuffs are the new luxury item in San Francisco," he adds.

Built in the 1920s, Vlahides's apartment comes with period built-in features. The most charming being an old ice box now used as storage space for books. And the diminutive kitchen area, which has enough space for a dining table, comes with whimsical 1950-era additions like painted steel cabinetry and chrome pulls. 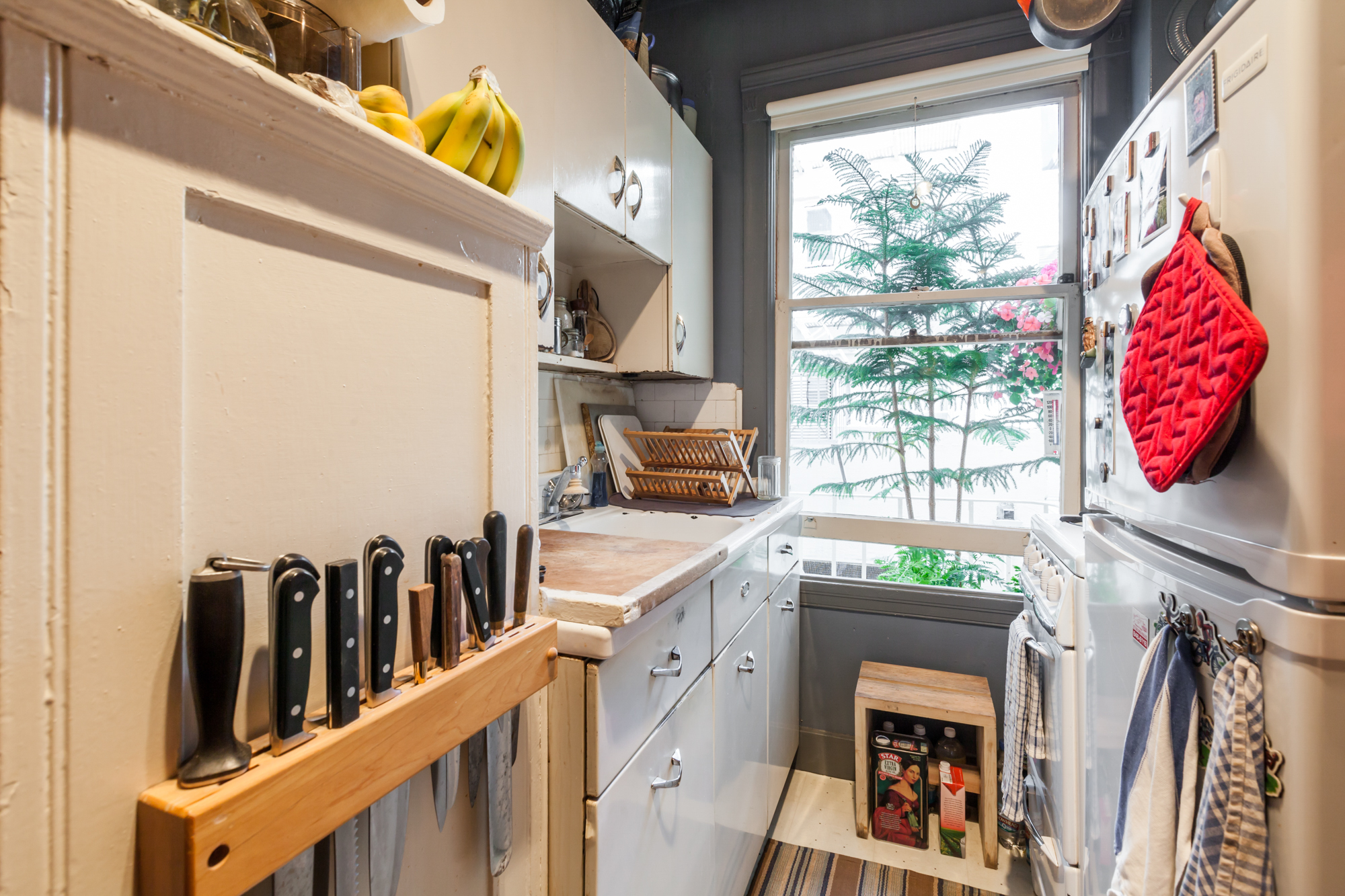 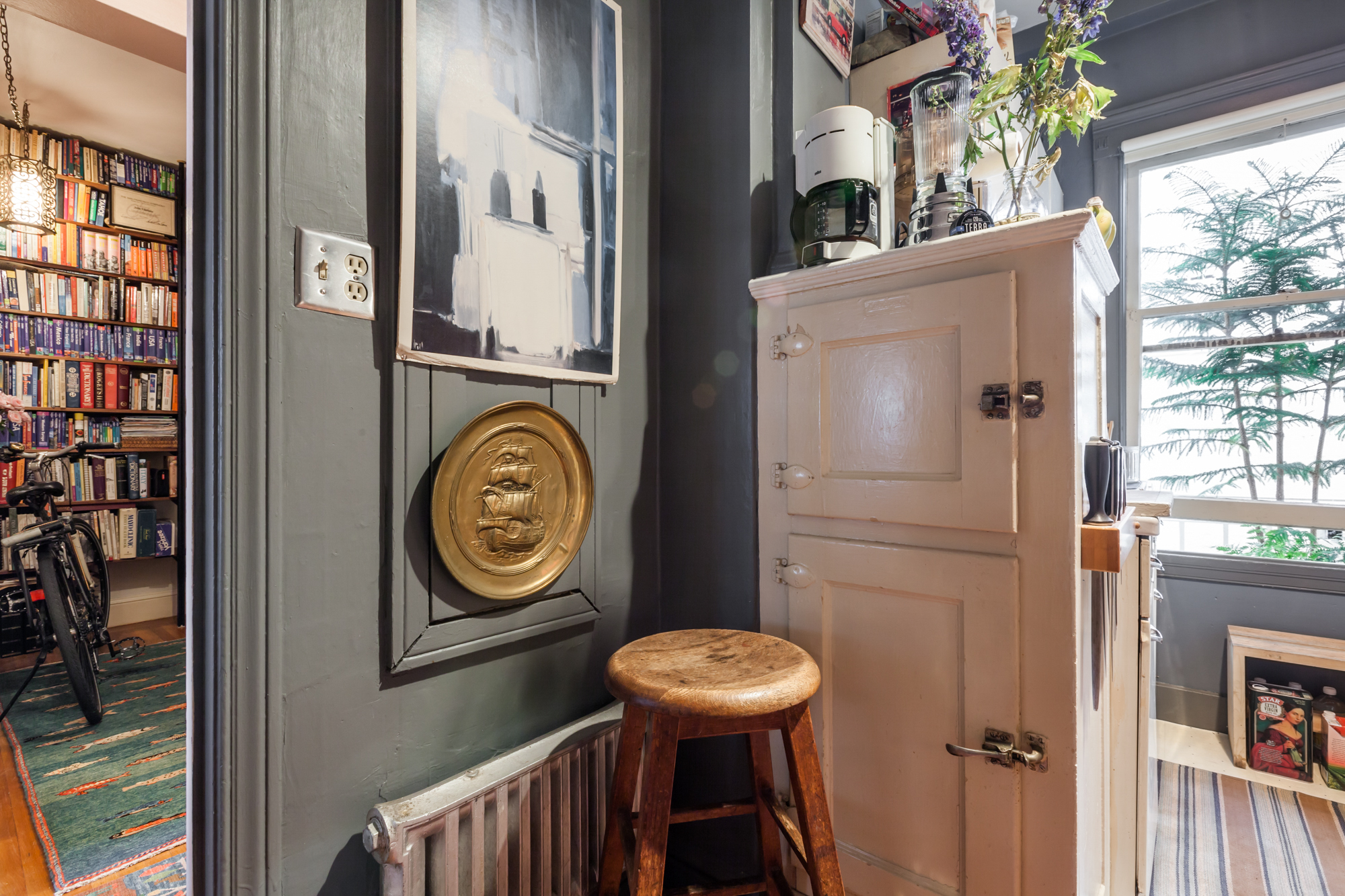 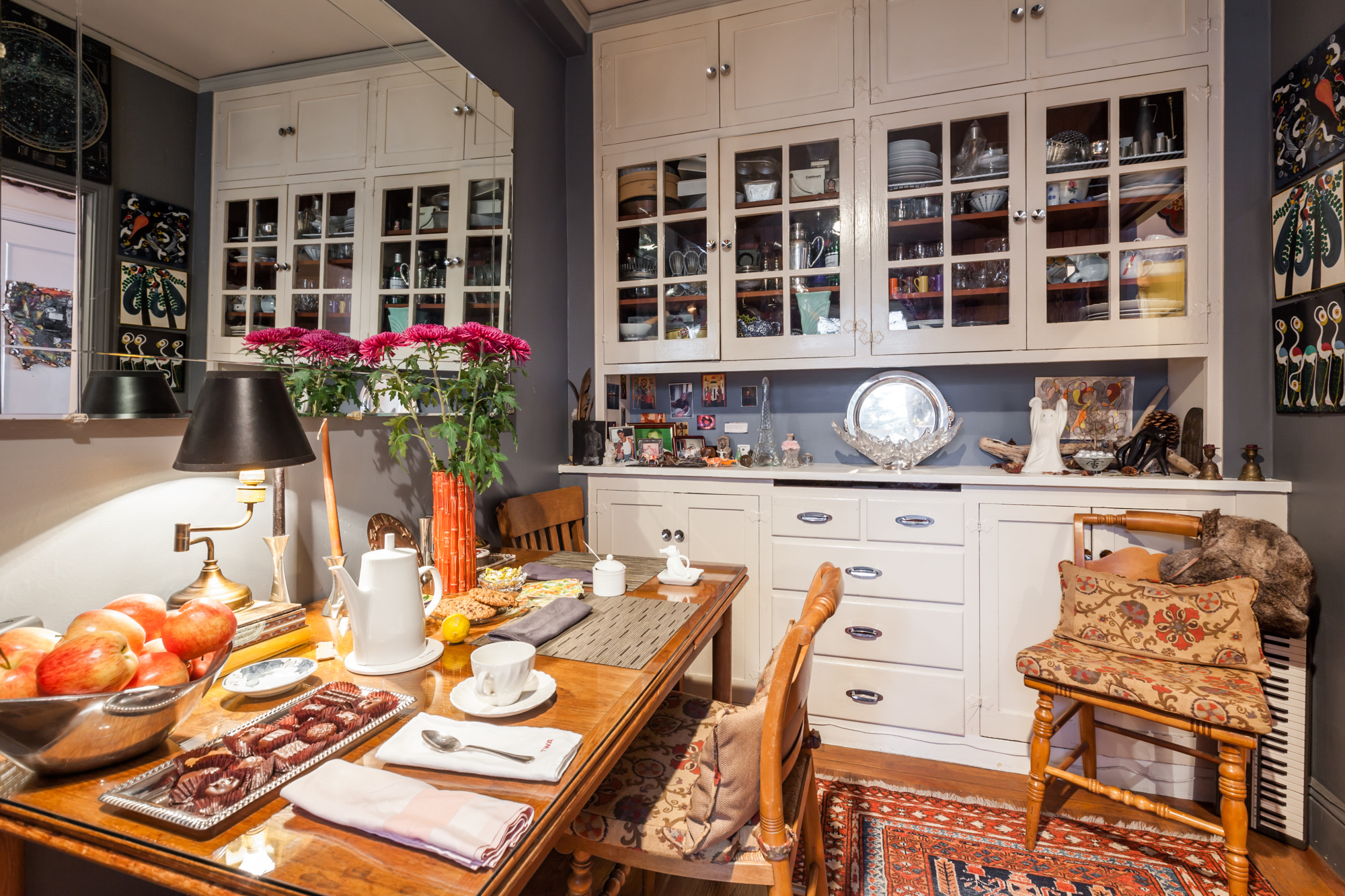 The studio’s two tiny iron radiators still work. And, after all these years, the original Murphy bed still used for sleeping. Vlahides pulls it out each night.

"The Murphy bed is real reason why I picked the apartment," he explains as he hauls it out. "It seemed so romantic at the time."

When asked about the pros and cons of using a hideaway bed, he doesn’t hold back. 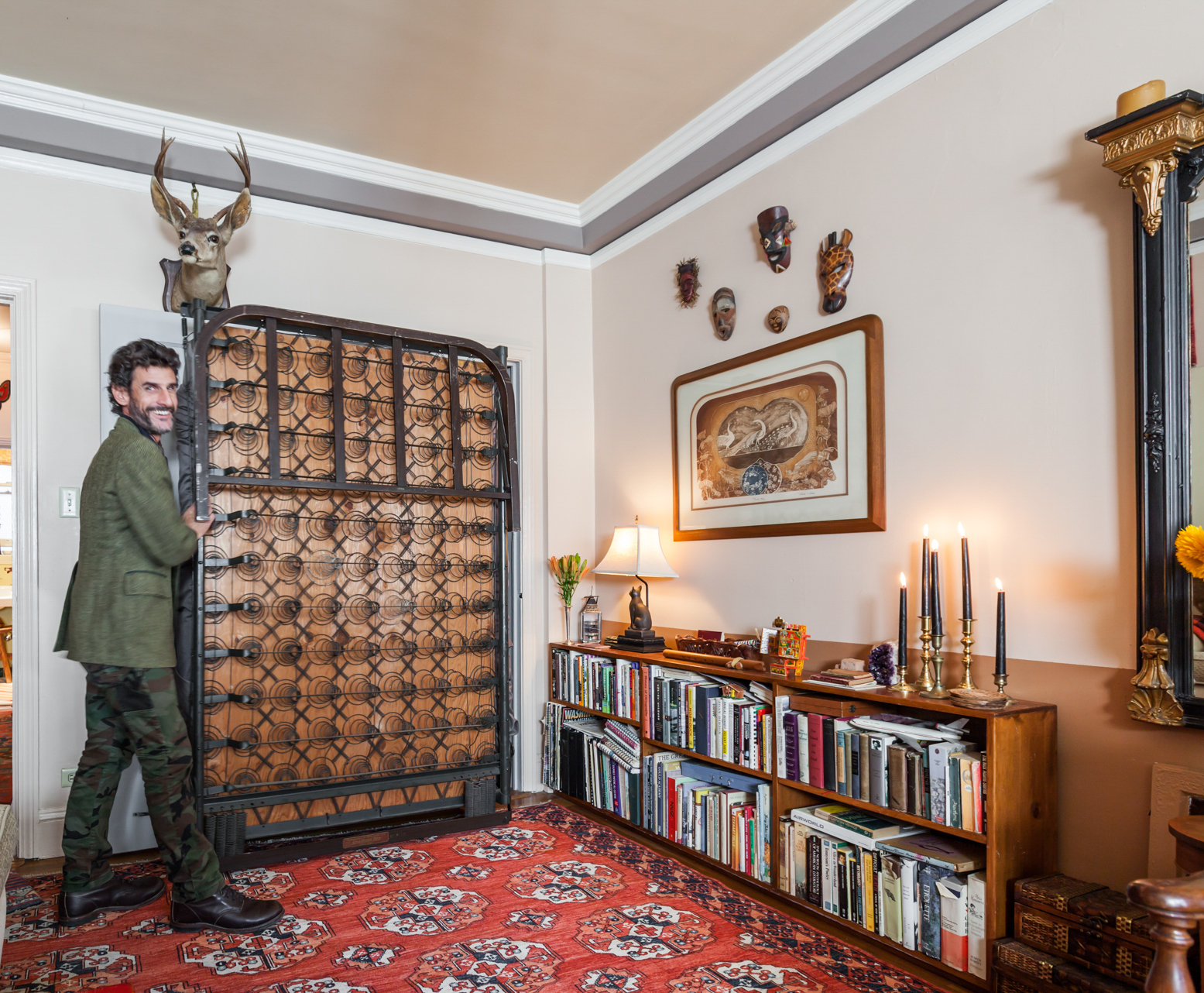 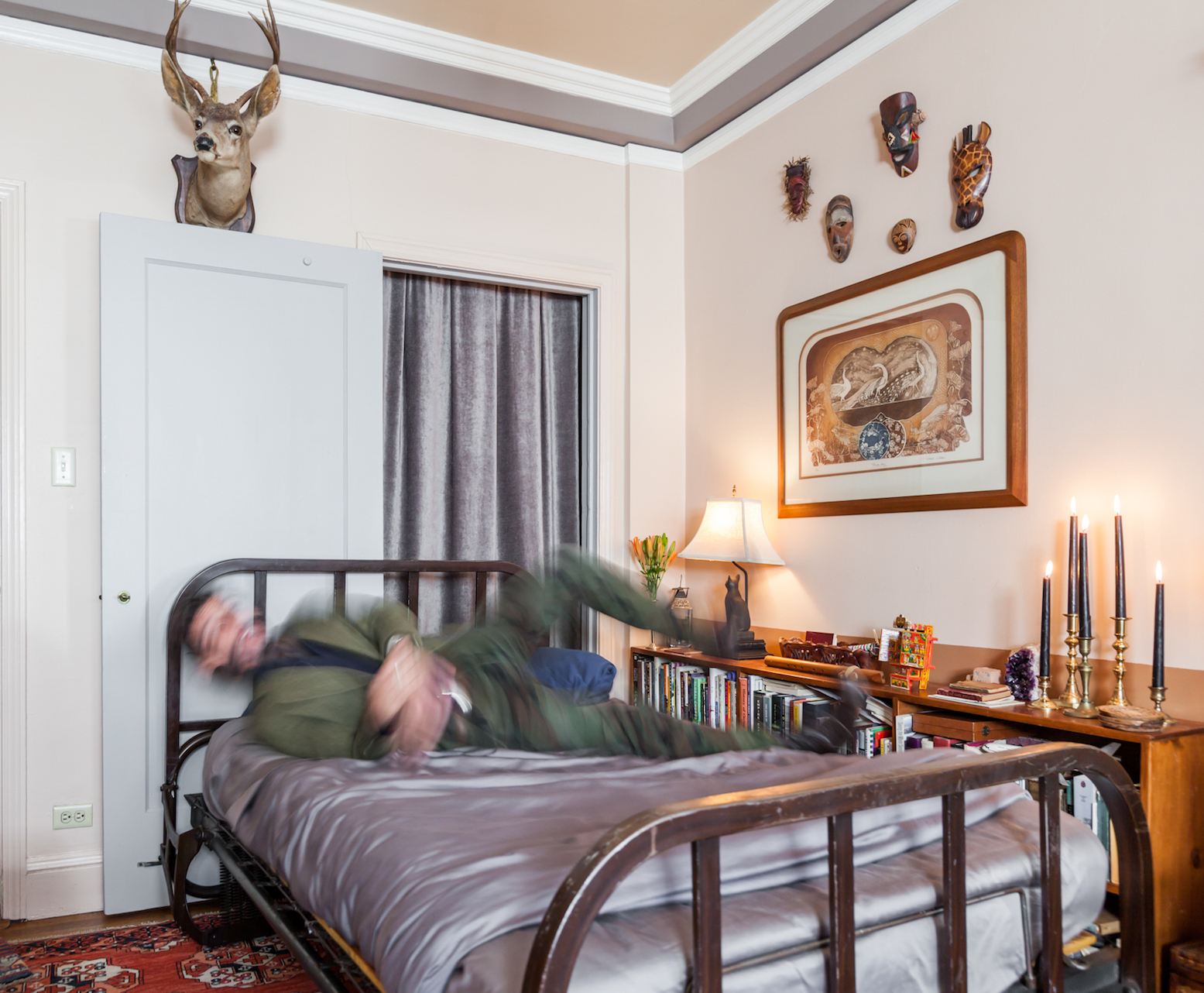 Flowers can also be found everywhere, from the bathroom to the kitchen and in the sleeping/living space.

"I’ve gotten so into flowers since my mother died a few months ago," says Vlahides. "I guess because they’re transformational."

Another eye-snatching moment in his animalic apartment (animal notes and accents can be found everywhere) are the rugs. Funneled to him though his friend Greg Halbert of Halbert Rugs, the runners that line the studio’s hardwood floors were created using a pre-industrialization method. Which is to say, the rug’s wool, once sheared, were washed and cleaned by hand in order to retain lanolin. After vegetable dye is aded, they were weaved by hand. "So they don’t get moths, they don’t shed, they’re stain-resistant, and they last hundreds of years." 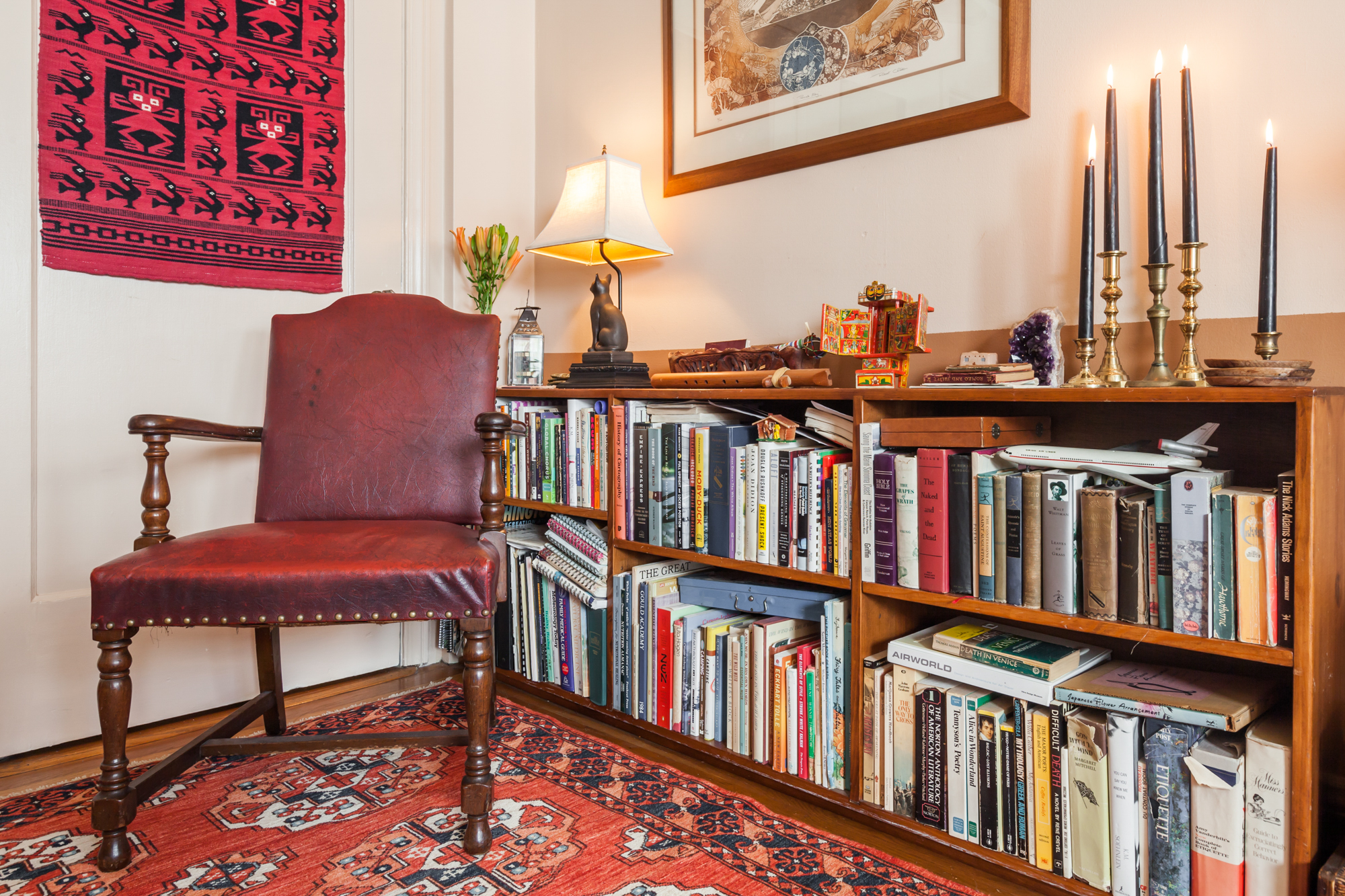 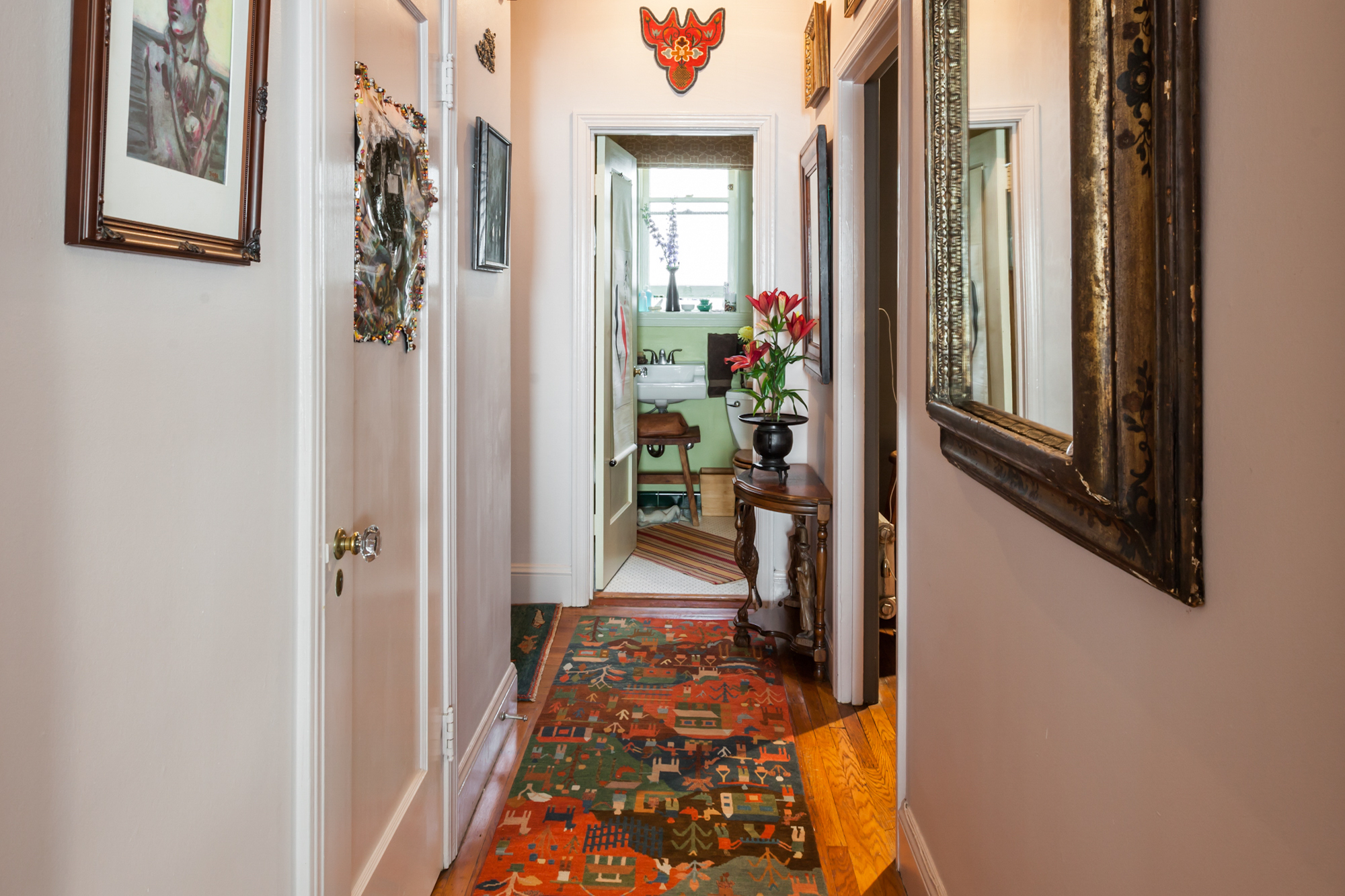 In 2000, Vlahides reimagined the space’s aesthetics from the rugs up. One is from Pakistan, one from Afghanistan, another from India. "This one is Tibetan," he explains referring to the narrative rug in his hallway.

The story of its creation astounds: Yayla’s Christopher Walter went to a village of Tibetan rug makers and asked if they would make a rug from leftover thread, a rug that told the story of their village. The this piece of folk art does just that—from kids chasing a ball to a gruesome scene of justice.

"It’s fascinating to look at this rug and think how the people making it must have giggled because they were weaving someone they knew, or felt emotional over a relative they decided to feature in the rug," says Vlahides.

The rug’s darker hues show an equally darker scene: a hanging. As riveting as it is stunning, all of it right underfoot. 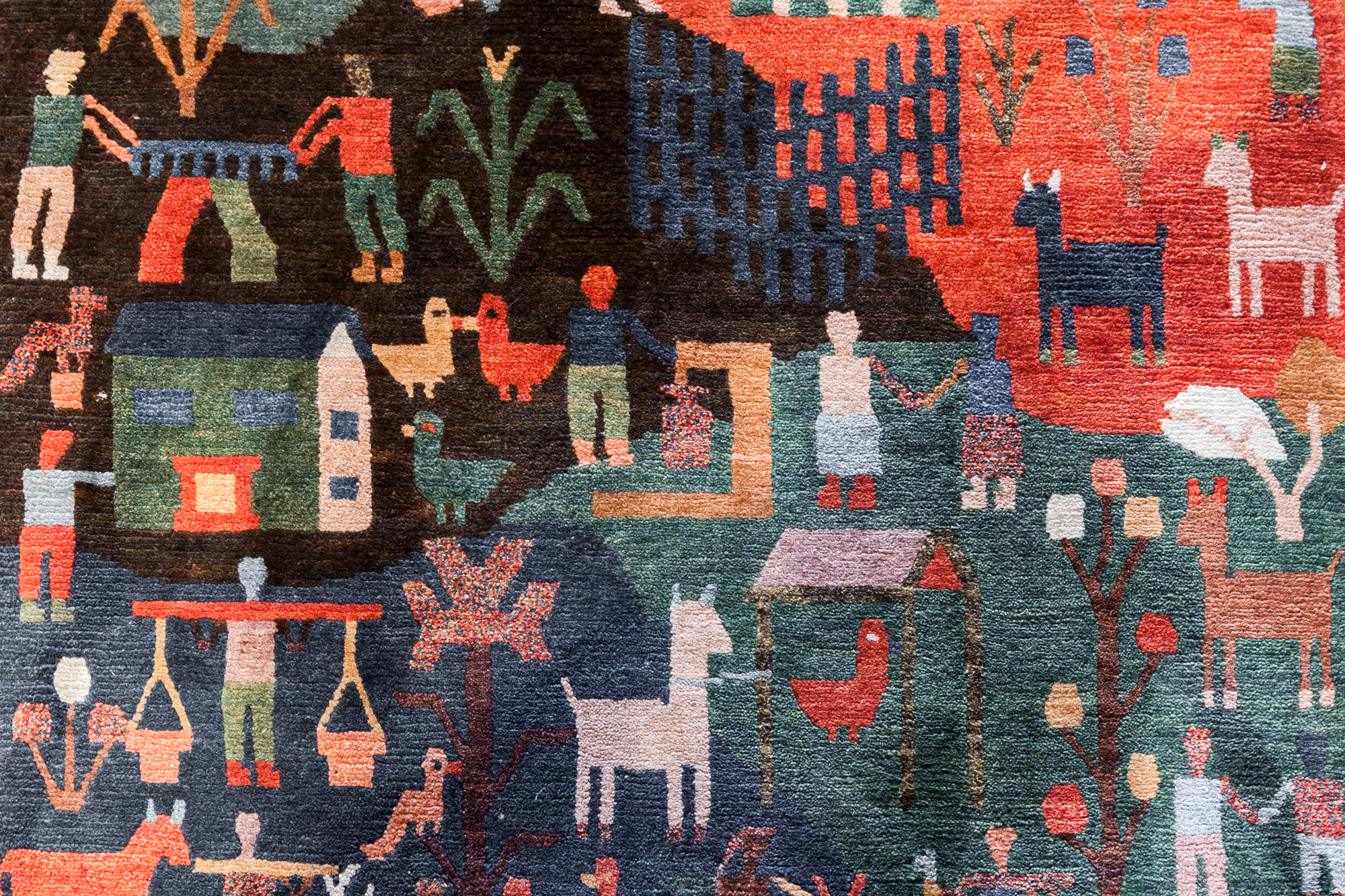 He acquired the Tibetan narrative rug shortly after his mother passed away this year.

"I wanted to get something beautiful that she would just go nuts for. She collected all of these gorgeous pieces of art. She traveled the world. She’s the one who inspired travel in me."

Other pieces of note are the Curtis Jere aviary sculpture casually sitting atop the radiator, the mounted deer head (affixed to the wall way before it became de rigueur in many a craft cocktail bar or Ken Fulk design), and the old iron window grill doors now used as wall pieces. 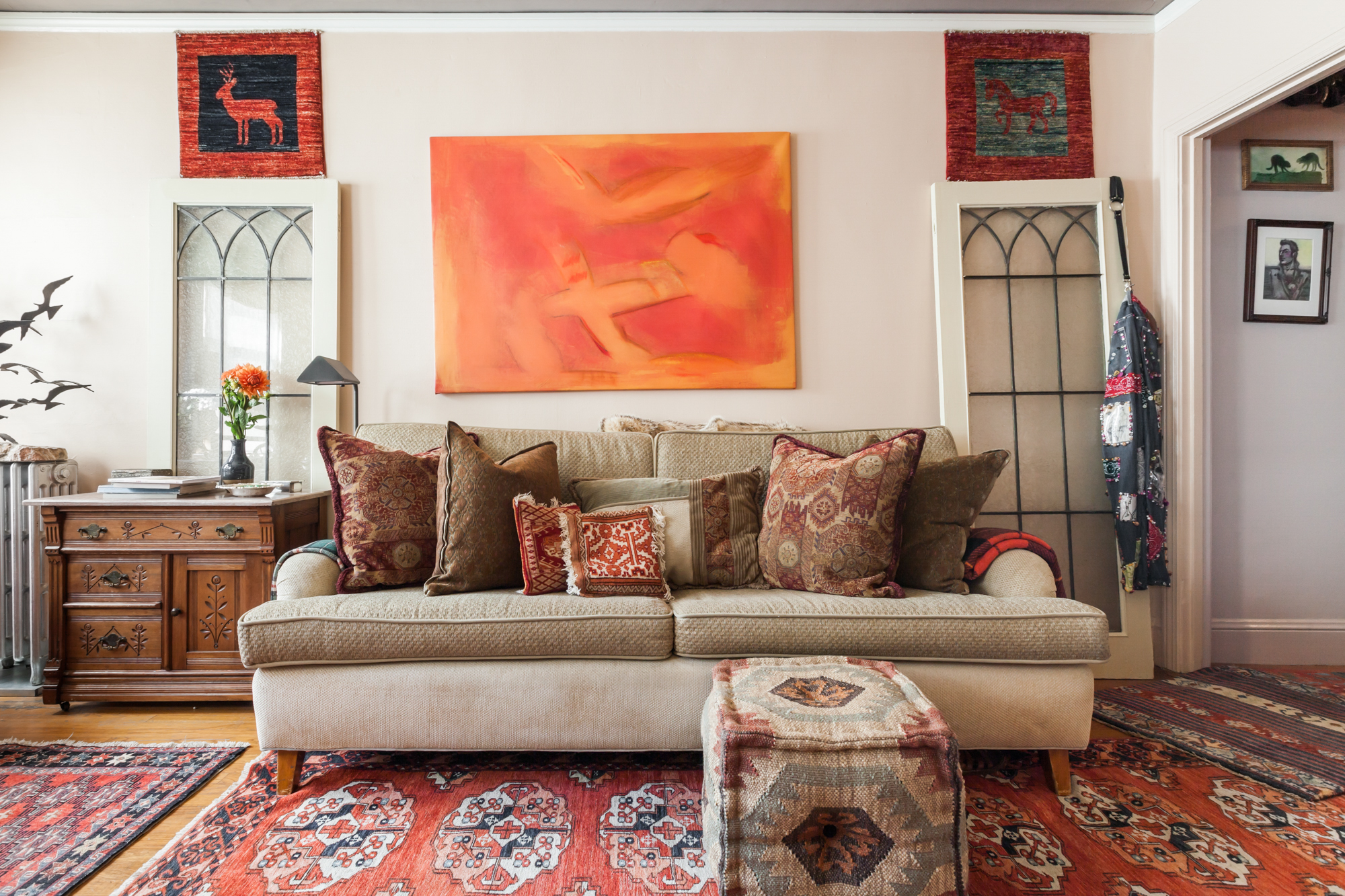 The two antique doors—reclaimed doors, in hipster parlance—were swiped from the City of Paris Dry Goods Company (1850-1976) in Union Square. "The building the city tore down to build Neiman-Marcus," John says. "It used to have an Eiffel Tower model on the roof."

At night he lights candles behind them to fill the room with a warm glow.

His Lalique crystal bowl, sitting in the kitchen almost like an afterthought, will drop the jaw of any intelligent interior designer. "This is ten pounds of crystal, and not the kind most people think of when they think of crystal in San Francisco," he deadpans. 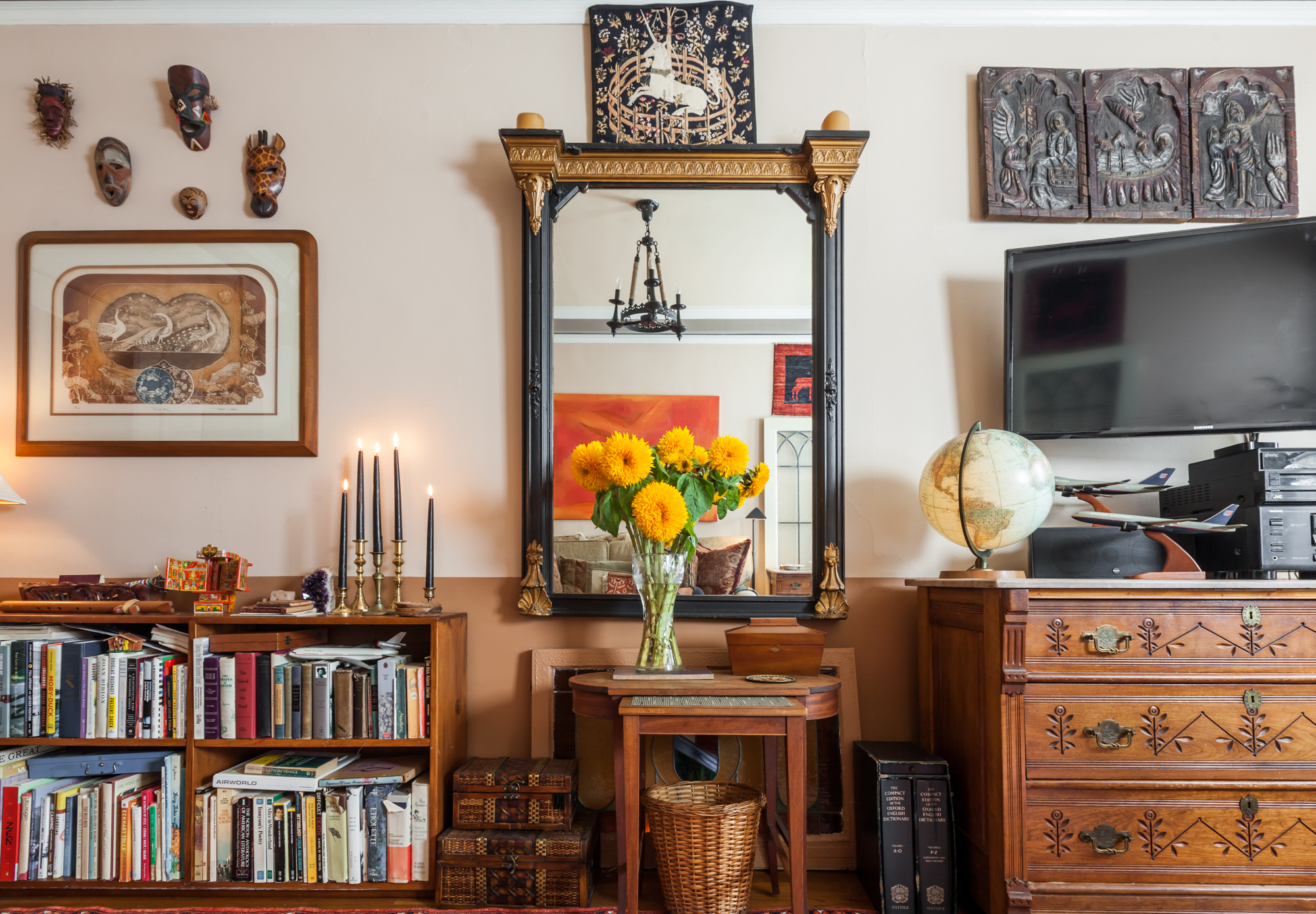 Hefty and weighty, contemporary decor doesn’t see a lot of crystal pieces like this one, making his bowl a rare treat to behold.

"As a child, I would see this bowl in my parent’s dining room in our Colonial home in upstate New York. Although I didn’t know what it was, it inspired me deeply. I would see the prismatic affect the sunlight would have on it as the day wore on. This bowl, to my five-year-old eyes, showed me how light refracted through glass, and I would trip out on it." 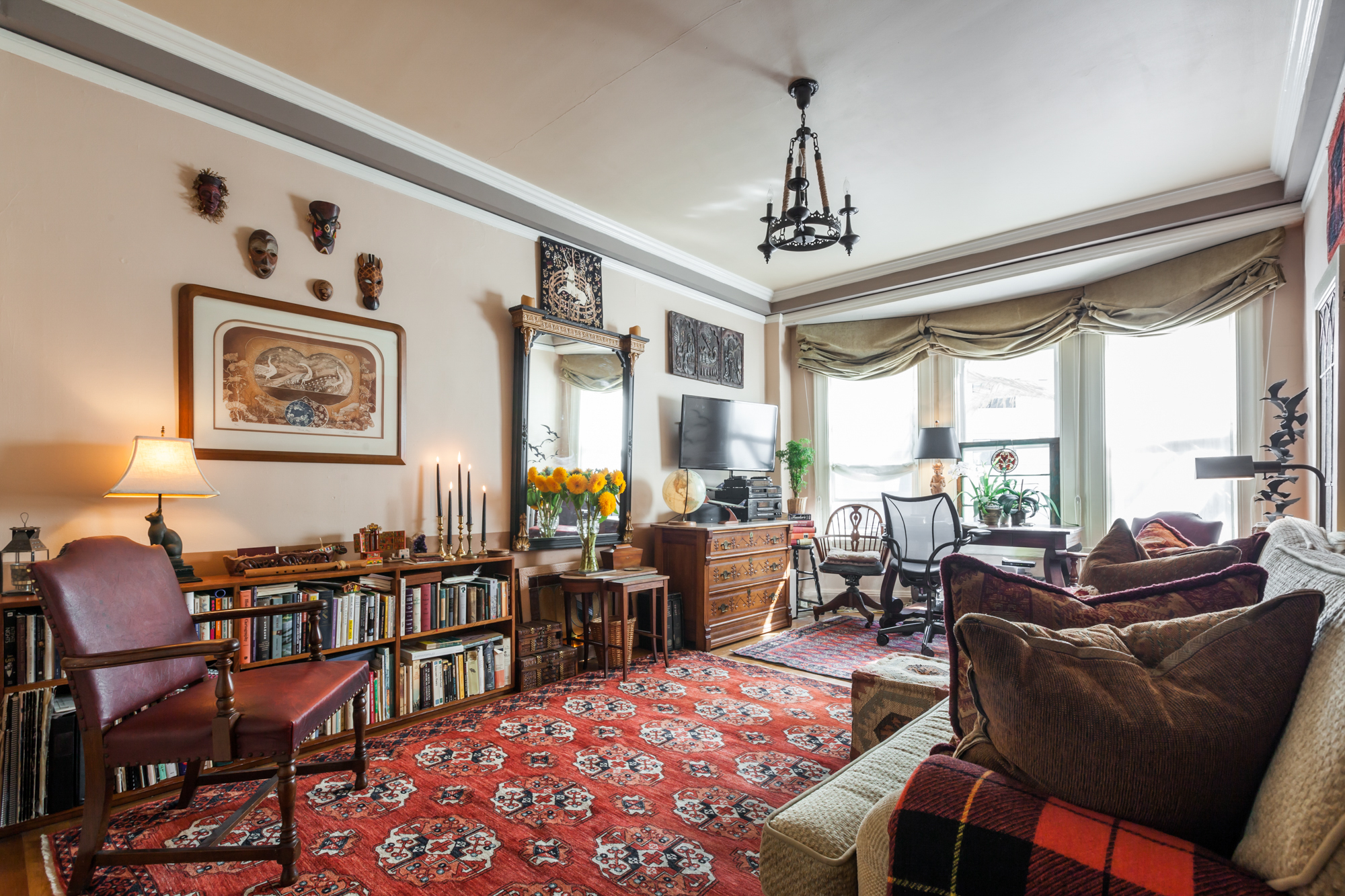 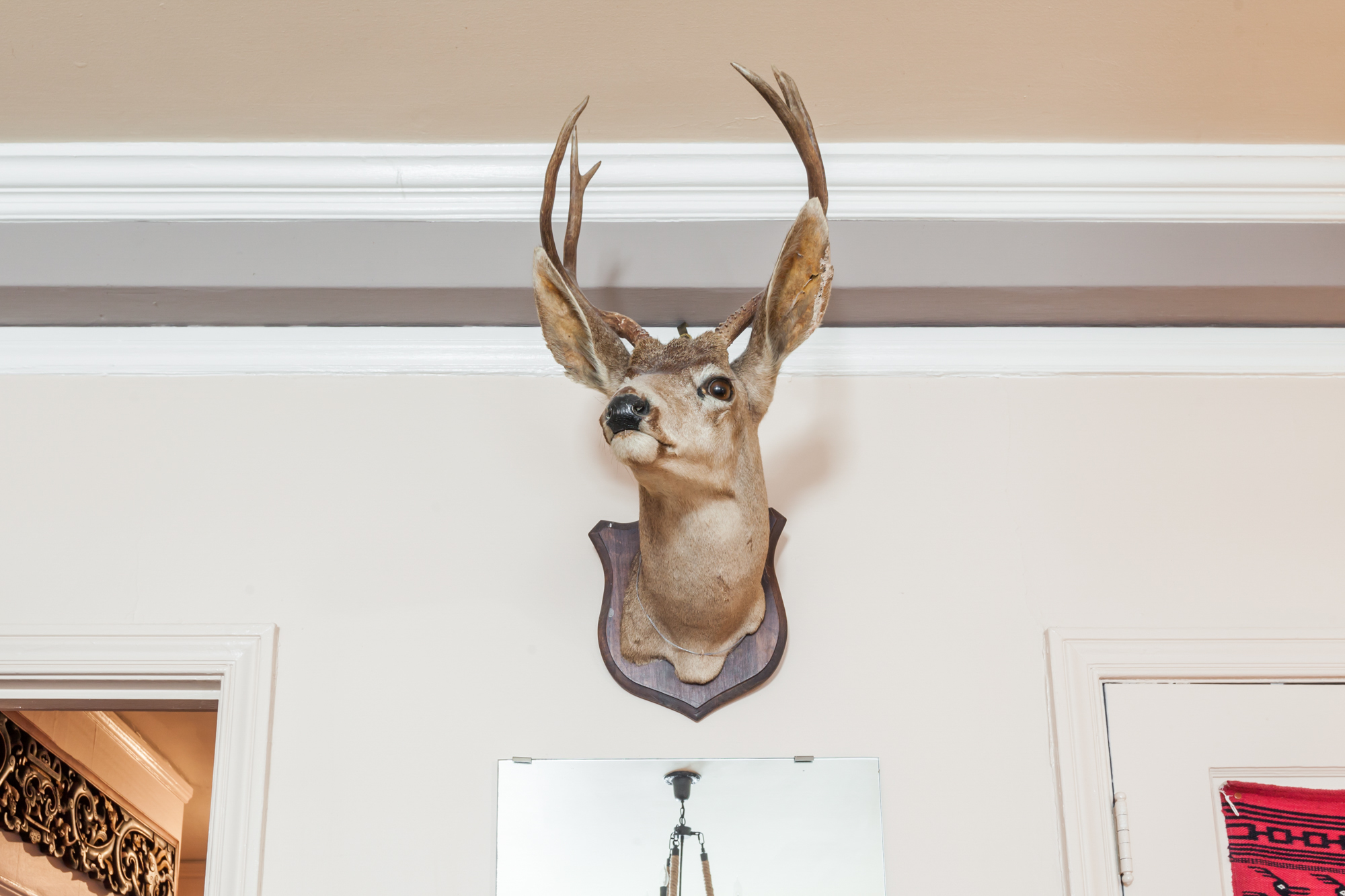 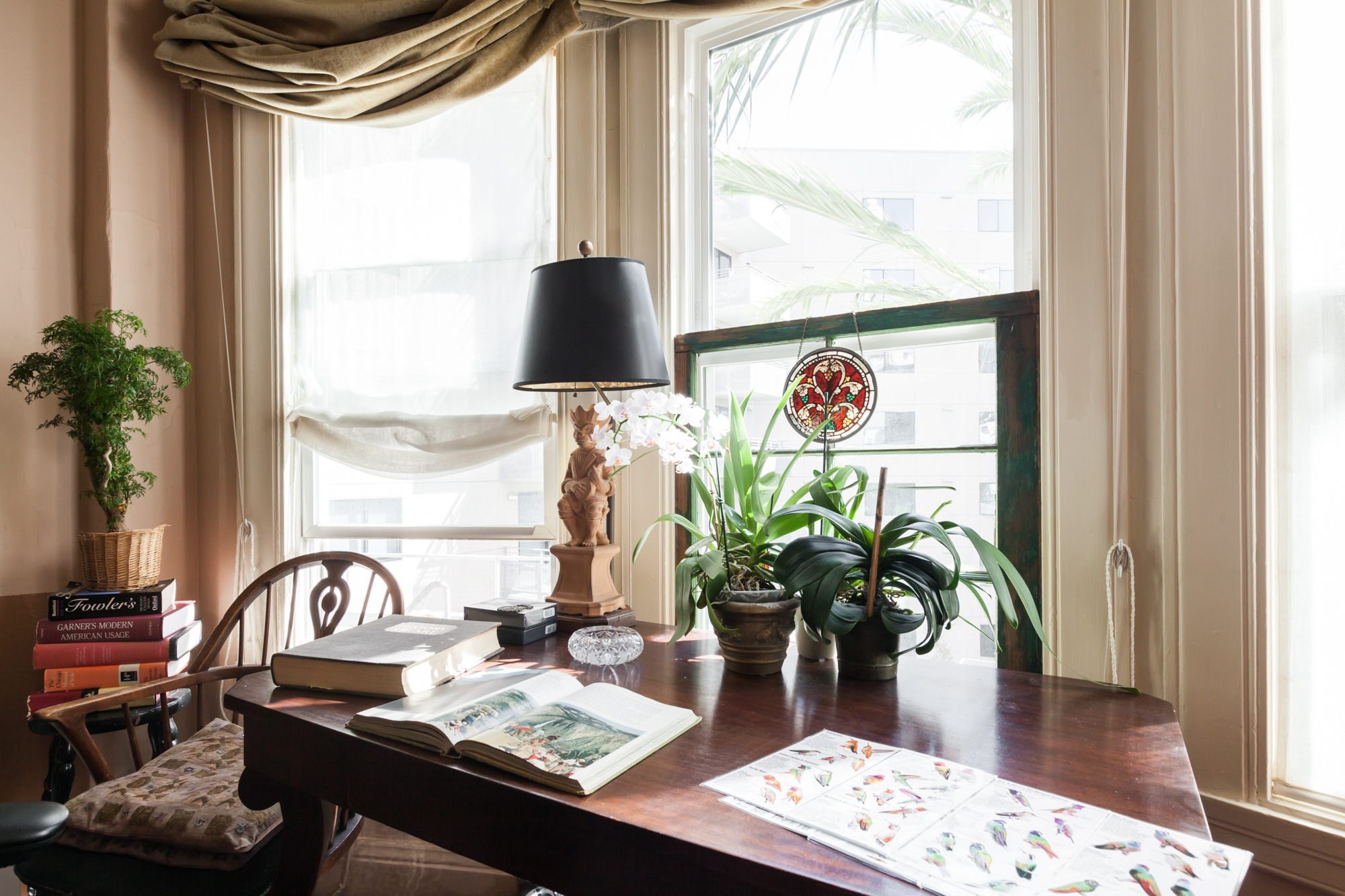 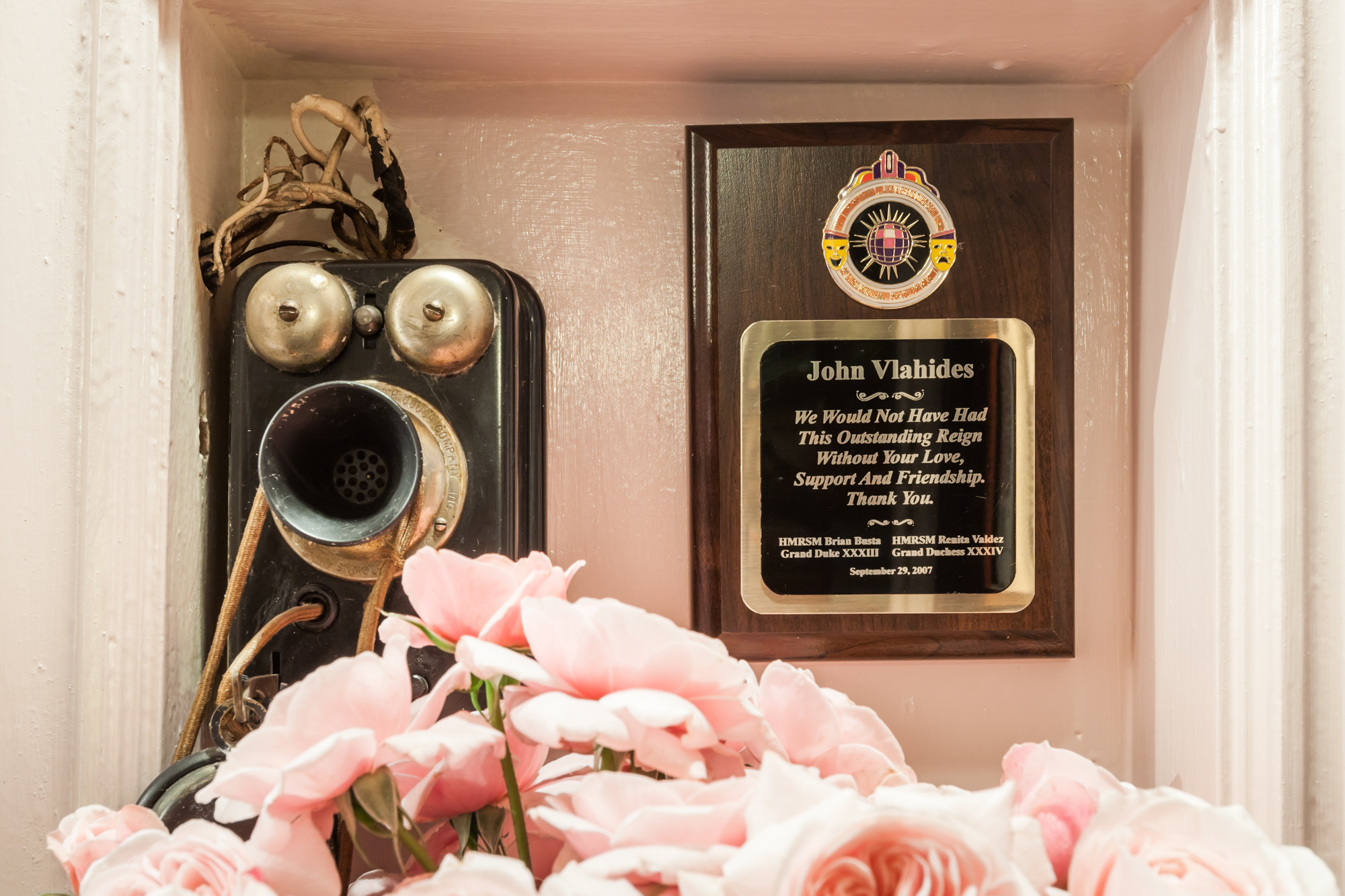 Idolatry of the past can also be found carefully placed throughout his home. Photos of bygone faces adorn a makeshift alter. A wooden box with elephants graces the bookshelf.

Indeed. If a 1956 Lalique crystal bowl looks out of place on a rickety, hand-painted 1920s kitchen counter, then that is a thing of beauty, en vogue or otherwise.

"In the end, my entire apartment is decorated by dead friends and family," says Vlahides, followed by his signature throaty laugh. "I am surrounded by the remnants of dead loved ones’ lives, and I love it."