It’s easy to love a home—any home—located atop Bernal Heights, smack dab on one of its steepest streets in the prized north slope’s banana belt. But San Francisco developer Lucas Eastwood, founder of Eastwood Development, and Alisha Eastwood, a psychotherapist, took their dreams one step further by reconfiguring a turn of the century Edwardian into a contemporary sanctuary for their family.

Records show that the home was built in 1906, a generic year prescribed to many Great Quake homes whose records were destroyed. The once rickety structure, a charming home somewhere between vintage and teardown, was a ripe for a makeover.

"With barely any square footage, it only came with four four rooms when we found it," says Lucas. "Two bedrooms, a kitchen, and a bathroom—all of it on one level." 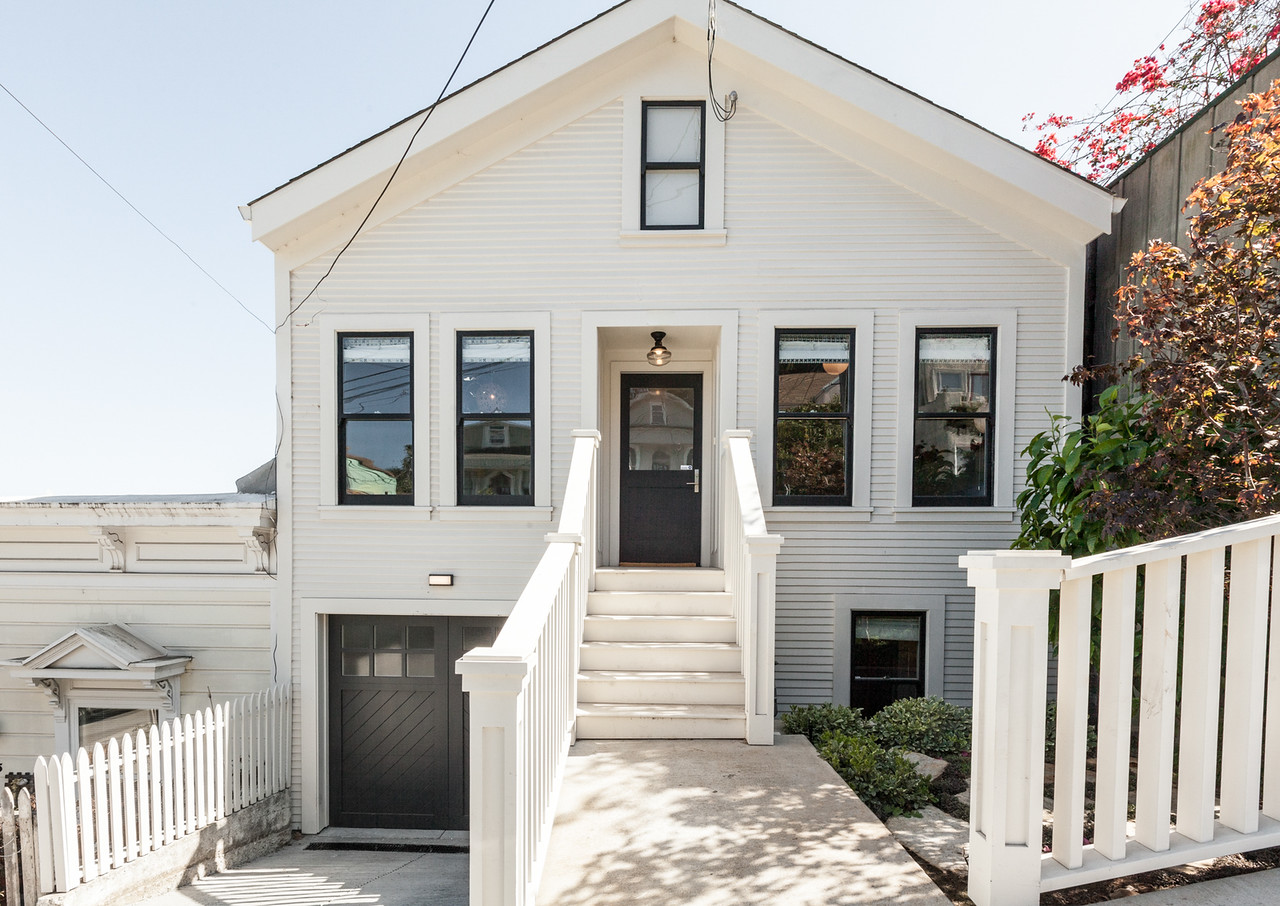 In addition to the paltry square footage, the house also came with an attic with around five cramped feet of head clearance. The couple took the attic and transformed it into their family room, expanded the main level, and added the lower level.

The lower level features a bedroom, master bedroom and master bath, both with stellar views of San Francisco and the bay; the second floor comes with a bedroom, nursery, kitchen, and dining room; while the top floor is reserved for kicking back with the kids and watching TV.

From start to finish, it took around a year to complete. "Around nine months of construction and three months of planning beforehand," Lucas says.

"We moved in on Mother’s Day, so it was like a gift," adds Alisha. "The kids were eight weeks and 18 months, so it was also kind of crazy." 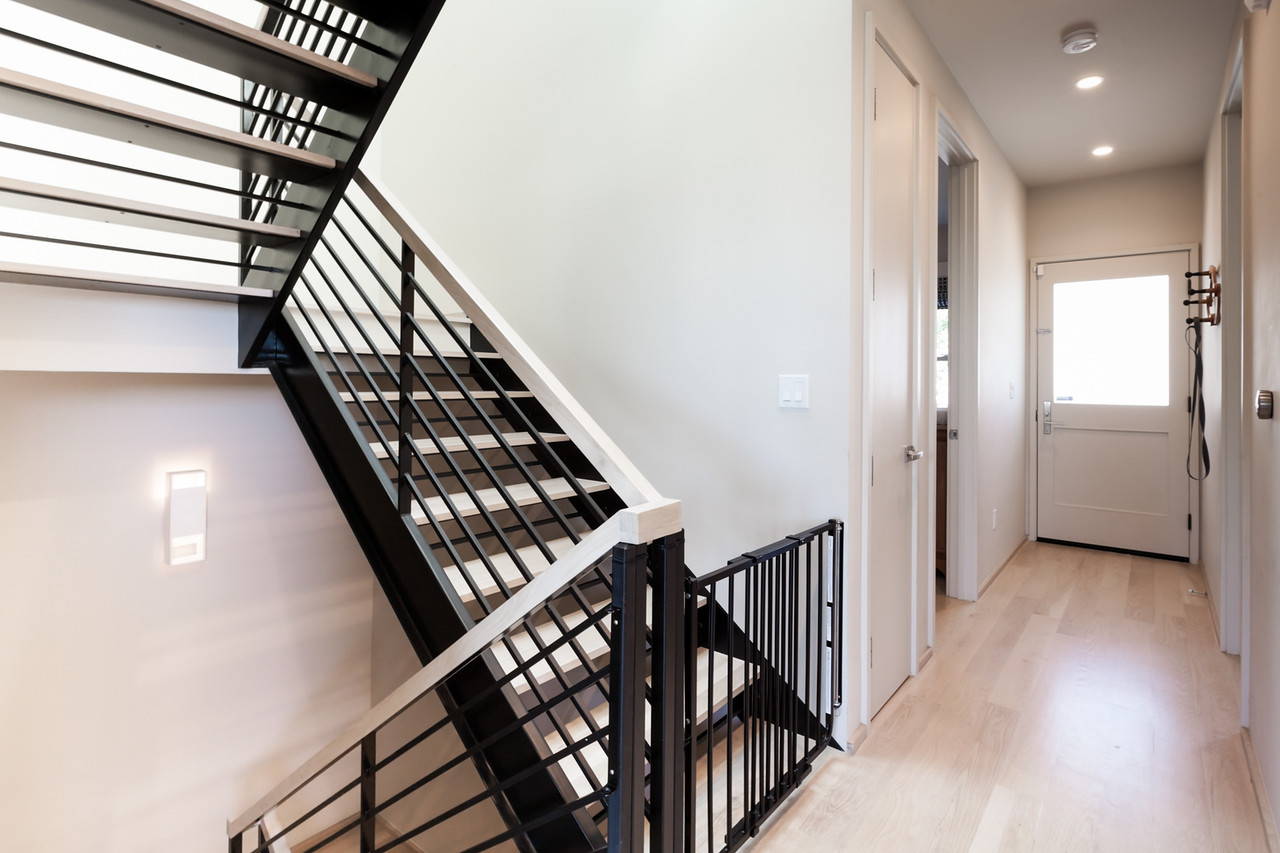 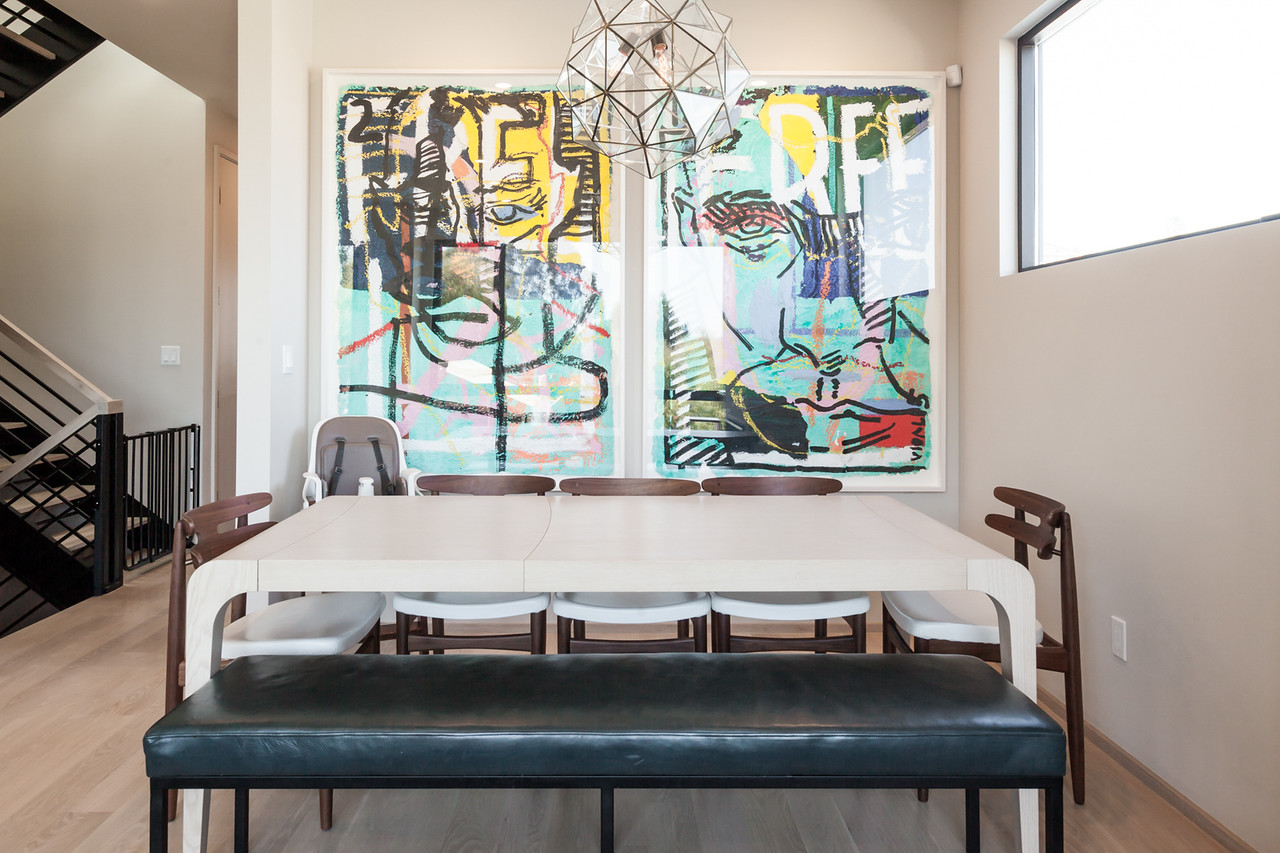 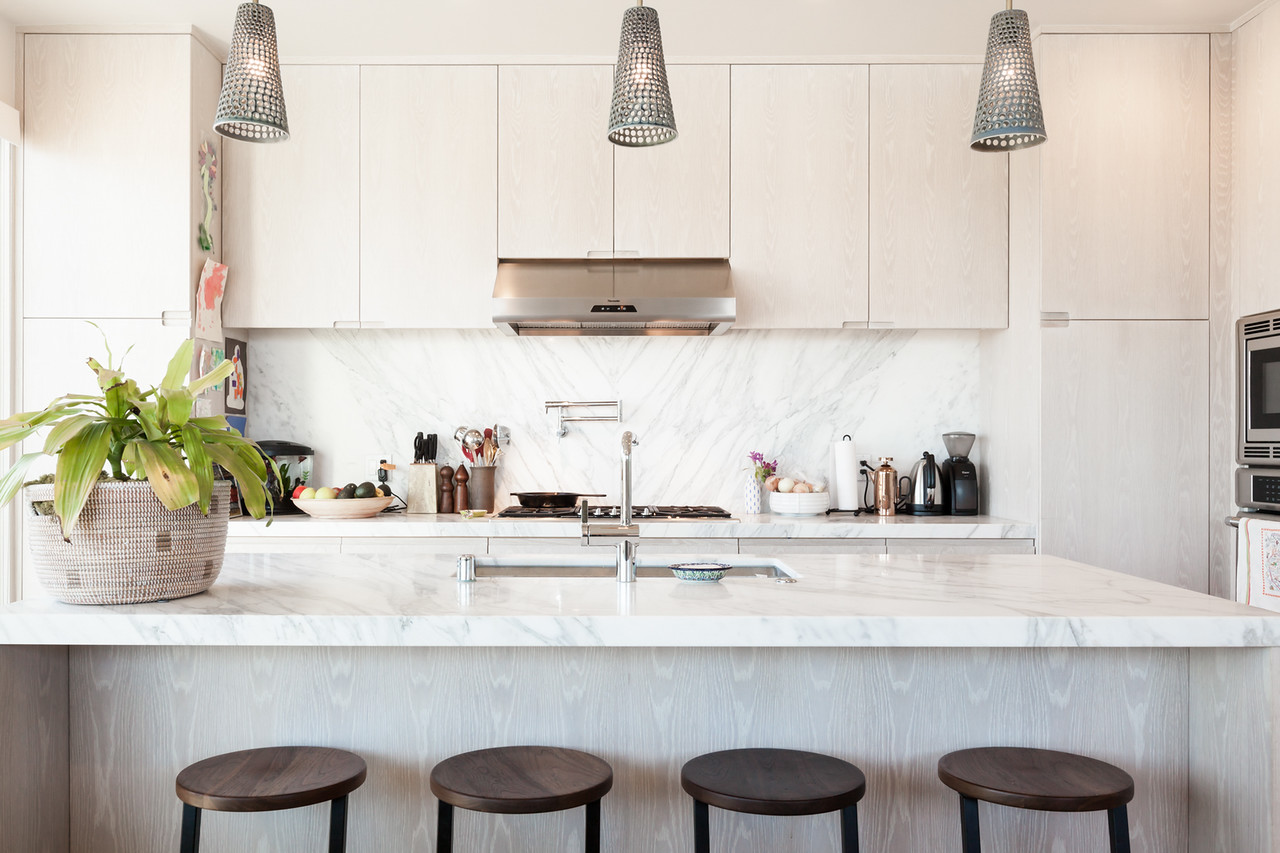 A bit of background on the couple: Lucas was raised on the Umatilla Indian Reservation in eastern Oregon, moving to San Francisco eleven years ago when he was a twentysomething whippersnapper. After working in construction and doing the odd job here and there, he started his own firm 2007, which, paralleling the city’s real estate boom, didn’t start picking up steam until 2010.

And Alisha, born in Berkeley, was raised in Los Angeles and North Carolina, returning to the Bay Area to attend Stanford. Before a career in psychotherapy, she was a regular on the NBC short-lived series Trauma.

"It is a really nice house and we put a lot of effort into making it ours," says Alisha. "But we ended up compromising on a lot of items due to budget." For example, they initially wanted travertine stone for the entire first floor, as well as more tile in the bathrooms, but those desired had to be pruned to save expenses.

Despite the cuts, a lot of luxe touches remain. 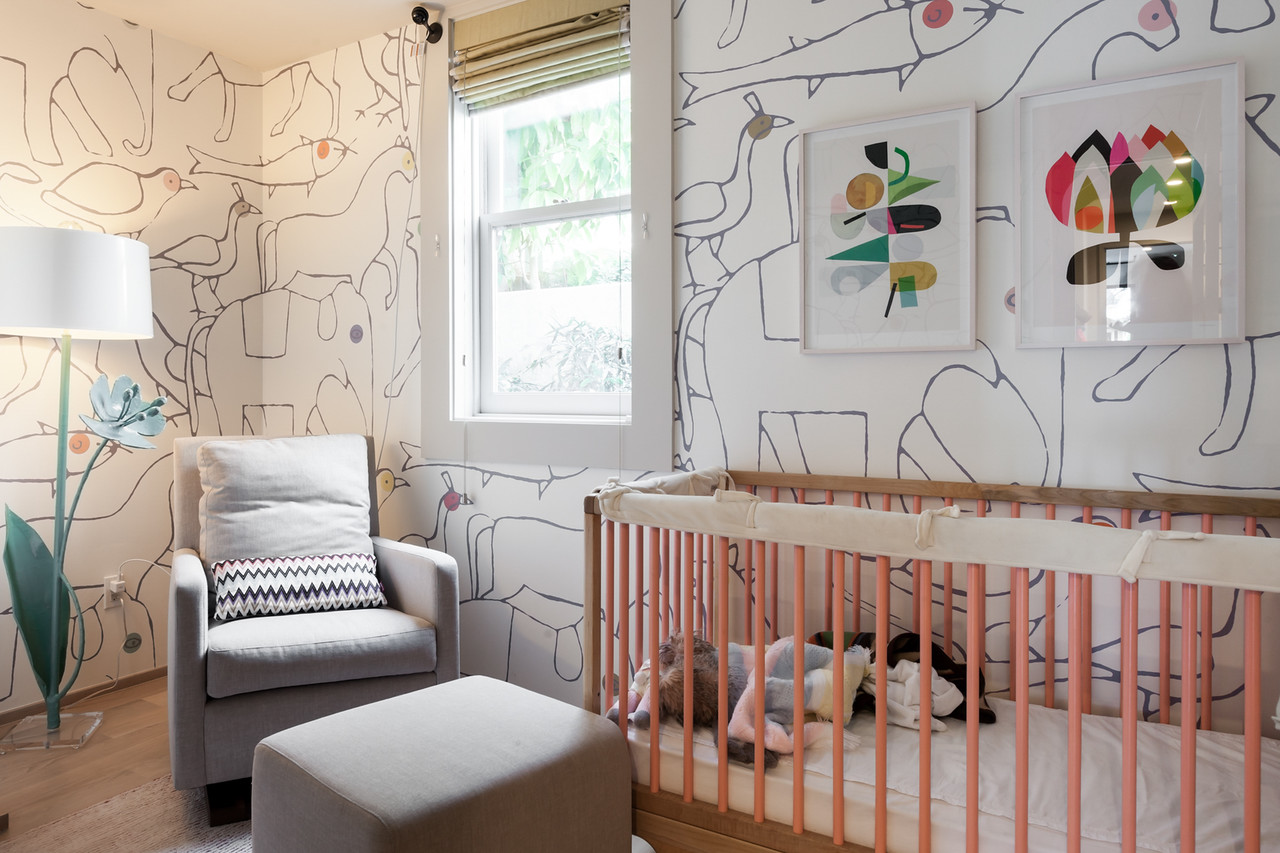 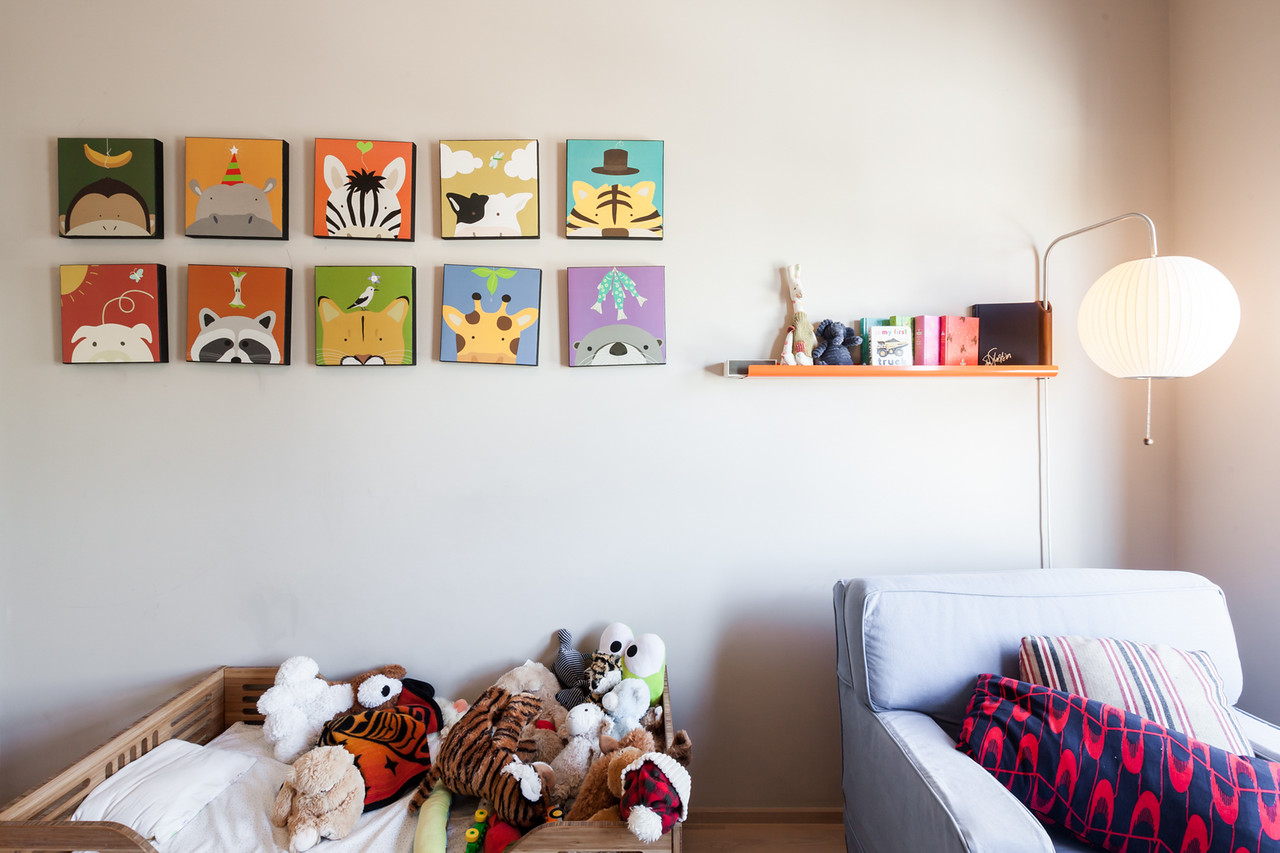 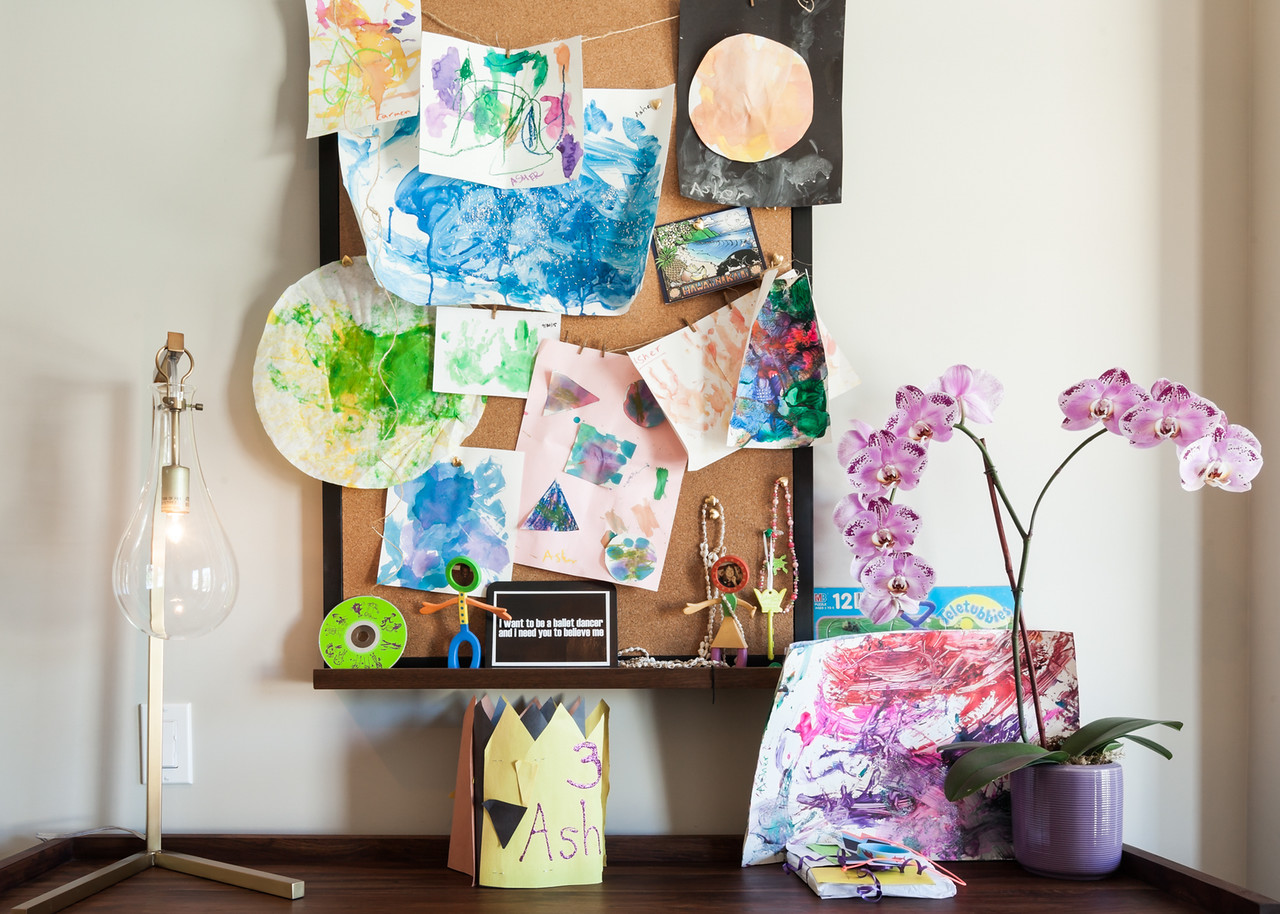 In addition to adding two levels to the home, the yard originally sloped on a steep grade, a big natural formation going down the hill. In order to make for a more pleasurable backyard experience, they put in an eight-foot retaining wall in order to create an expansive flat backyard.

The house interiors were conceived by both Lucas, Alisha, and Sayre Ziskin at SVZ Design. A clean white backdrop provides the perfect setting for the family’s budding art collection, which features both original paintings and black and white photography.

"I wanted something that was old and retained some of its character," says Alisha. The front of the house is almost exactly as it was 100 years ago. From the front it looks like a quaint, almost nondescript, providing the perfect counterbalance to the sleek, modern decor and configuration inside.

Asked what they like best about the neighborhood, Alisha reveals, "It’s almost like you’re not in the city because of all the nature, the trees, and you’re up by the park. It’s very quiet." 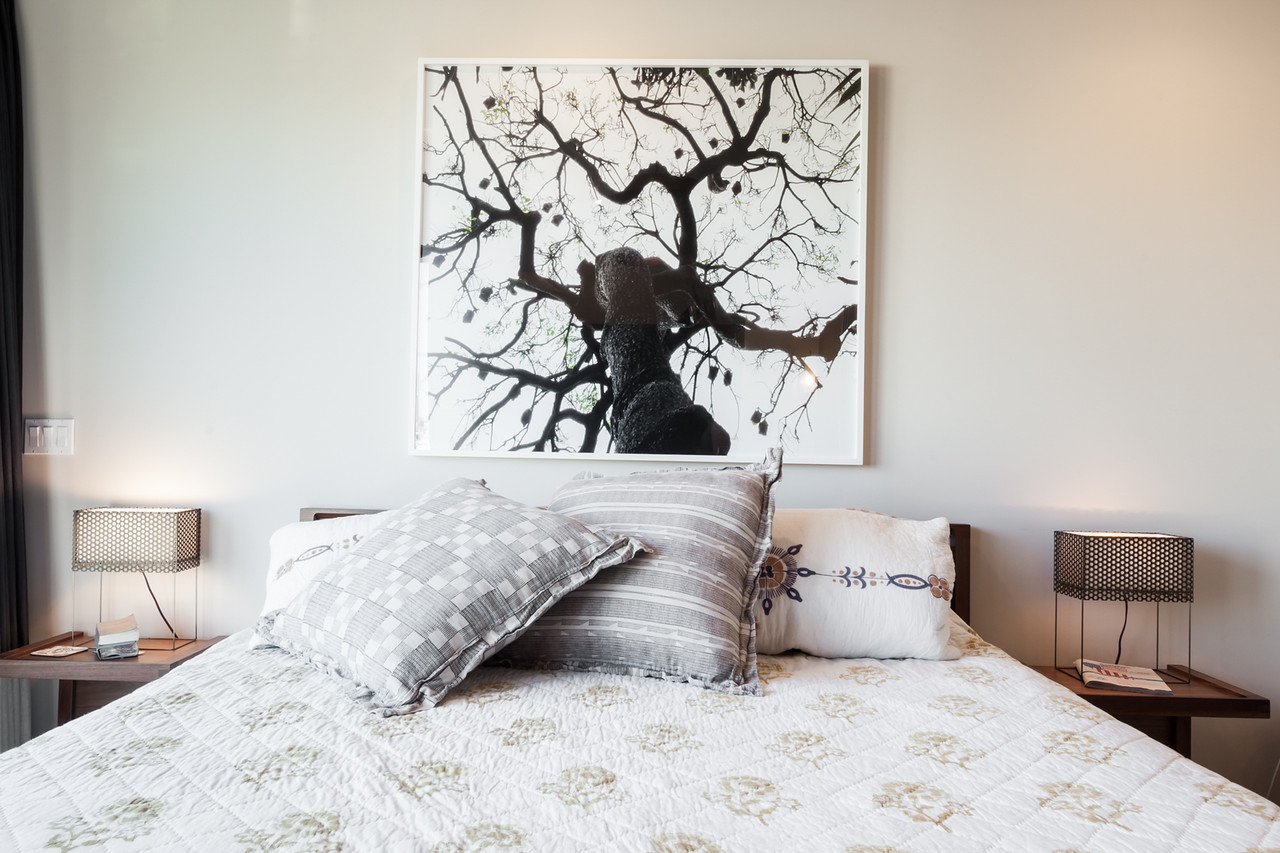 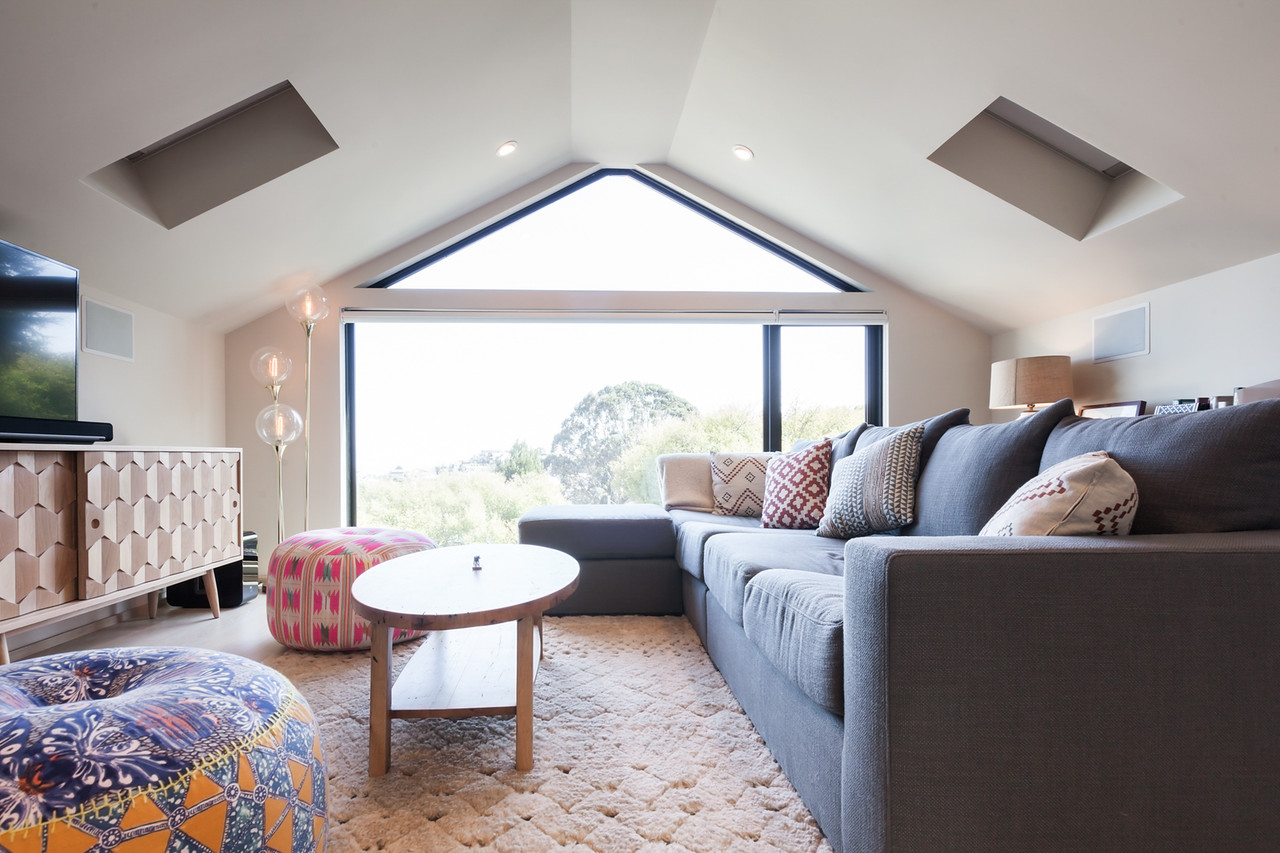 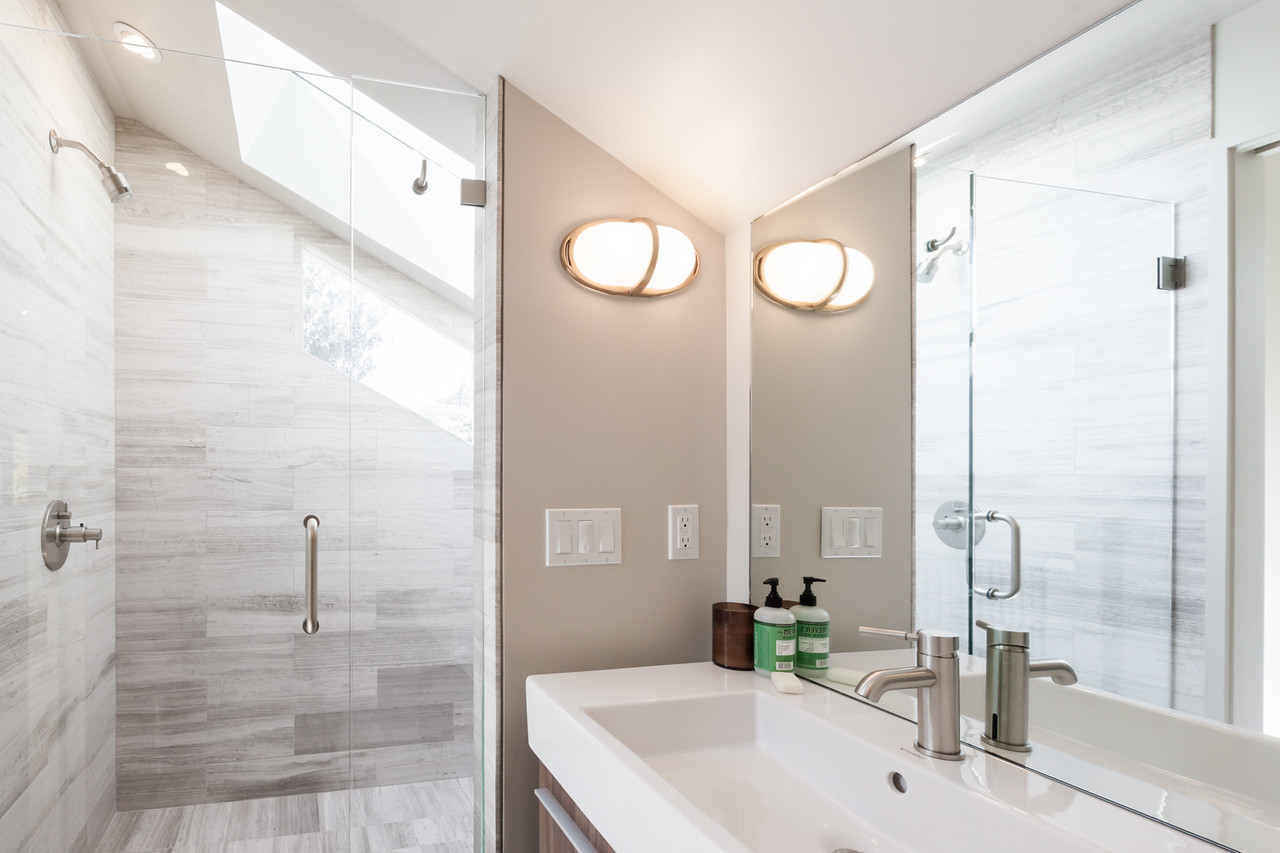 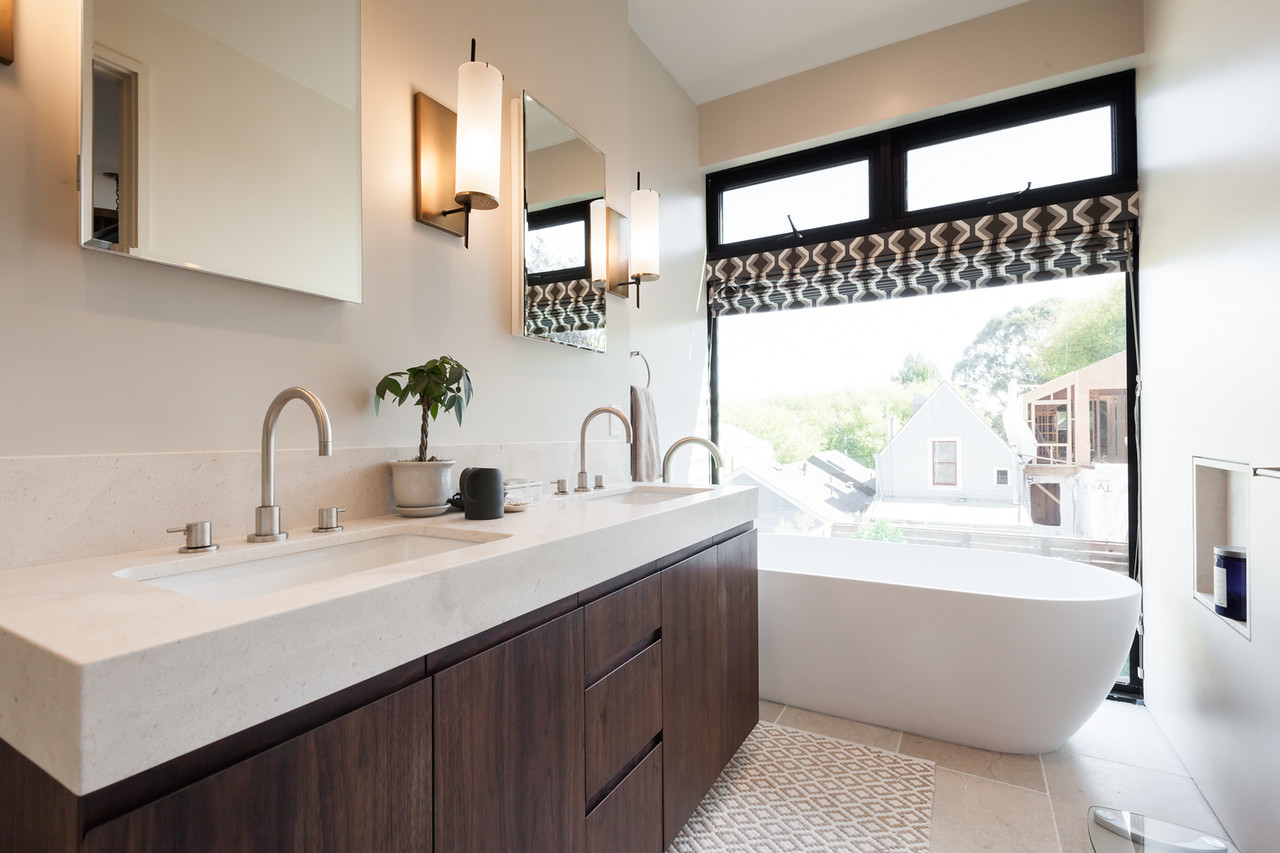 And in a rare case for San Francisco homes, it comes with air conditioning. What will all of the windows "it can be like an oven in there during the day sometimes."

When asked if they plan on staying here for the next 50 years, Lucas, with a refreshing cadence of casual confidence, says, "No." While the two admit that they and their kids, ages two and 11 months, are more than happy here, they will most likely move elsewhere around the city. Given the life of a developer, with a keen on the housing market, it only makes sense.

Until that day, the family will remain content in the home they envisioned together.