Meet the tech couple who traded their condo for an Airstream

"When you're actually in it, it doesn't feel like you're taking a step down”

Editor’s note: This post was originally published in 2015 and has been updated with the most recent information.

In 2014, Nancy Broden and Michael Fortson were having breakfast at the Town's End Bakery, wondering how to make their life make sense. Both tech workers in their 40s, they had a pretty good setup on paper: Broden was a veteran of Twitter looking for her next project, and Fortson was making a good living developing iPhone apps. The couple owned a two-bedroom condo at the Brannan, close to AT&T Park, where they were regulars at Giants games. But they had bought in 2007, right at the pre-recession height, and the squeeze of the mortgage payments began to make them feel like a support system for their condo, not the other way around.

"It felt like the tail wagging the dog," recalls Broden. Without thinking, she blurted out something about buying an Airstream. "Then I was like, 'Oh, wait, no, I don't want to live in a trailer,'" she says. "Just because there's that weird stigma that we're living in a van down by the river."

The idea made a kind of sense, though. Both Broden and Fortson can work from anywhere, and going off the grid would allow them to, as Broden explained, "fit work around our love of baseball rather than the other way around."

The rest happened pretty fast: In August, en route to a wedding, they found themselves at an RV dealership in Denver, scoping out a 28-foot-long 2015 Airstream International model. Inside, the interior checks out at just under 250 square feet—about 1,000 square feet less than the condo they had just sold.

"The trailer was financed like any other mortgage," recalls Broden. When she asked about the monthly payment, the dealer said, "Four ninety-five." "I said, four hundred and ninety-five dollars?" remembers Broden. "He said yes, and we were rolling on the floor laughing."

Once they bought the Airstream, the couple spent the rest of baseball season at an RV park in Half Moon Bay. Before hitting the road in earnest, they overhauled the interior to turn it into a mobile office, Fortson explained, speaking by phone from Eugene, Oregon, where the couple stopped recently to have solar panels installed on the roof.

Airstream configurations emphasize bed count, but what they really needed were desks. In the bedroom, they turned the bed sideways to make room for Fortson's desk, which flips up from the floor. They even installed a small standing desk, which can flip into place when the main desk is put away. From his perch, says Fortson, "there's a fantastic view out the window."

At the other end of the trailer they devised a separate workspace for Broden by replacing a set of train-car-style seats with a wraparound diner-style booth. They installed a work surface that converts from a dining table to a large desk; the entire table can also disappear under the seat, leaving one big ottoman. With a mobile broadband router and a grandfathered-in Verizon plan with unlimited Internet, they can each hold Skype meetings on opposite ends of the Airstream without disrupting the other.

Portlandia's famous tiny-home ribbing aside, there's no home office in the bathroom. The trailer does contain, however, a sleek, lighted glass sink inspired by the Four Seasons, Denver.

"It's a pretty high-end thing that we're living in," says Broden. "When you're actually in it, it doesn't feel like you're taking a step down."

After stretching themselves to afford their life in San Francisco, the couple estimate that they are, roughly speaking, spending less than $20,000 per year on their mortgage, insurance, and parking. They're also paying for a good mail service in Tiburon, whose employees don't mind opening the occasional letter and sending a scan of it via email. 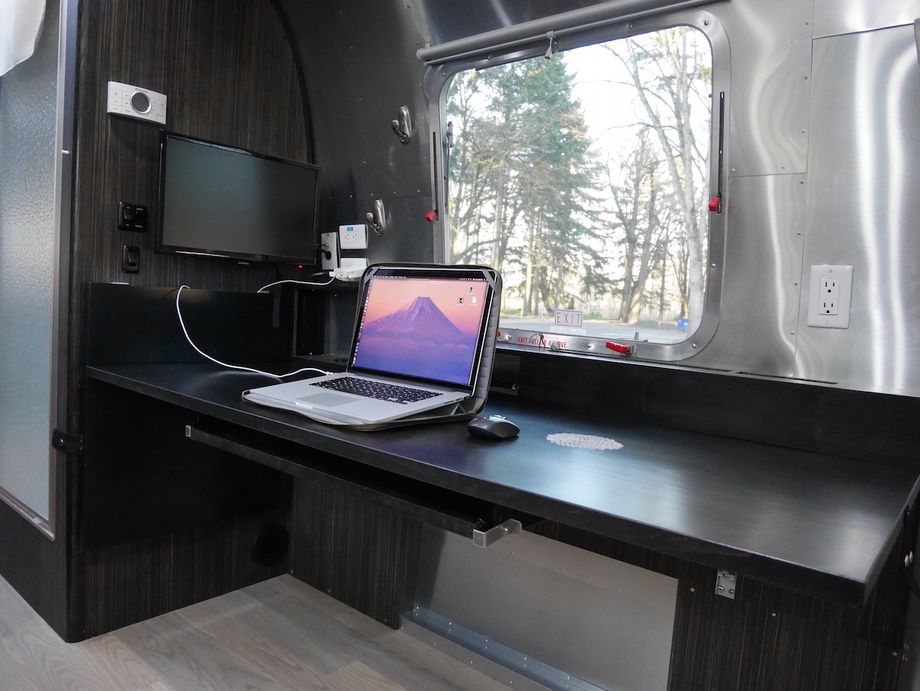 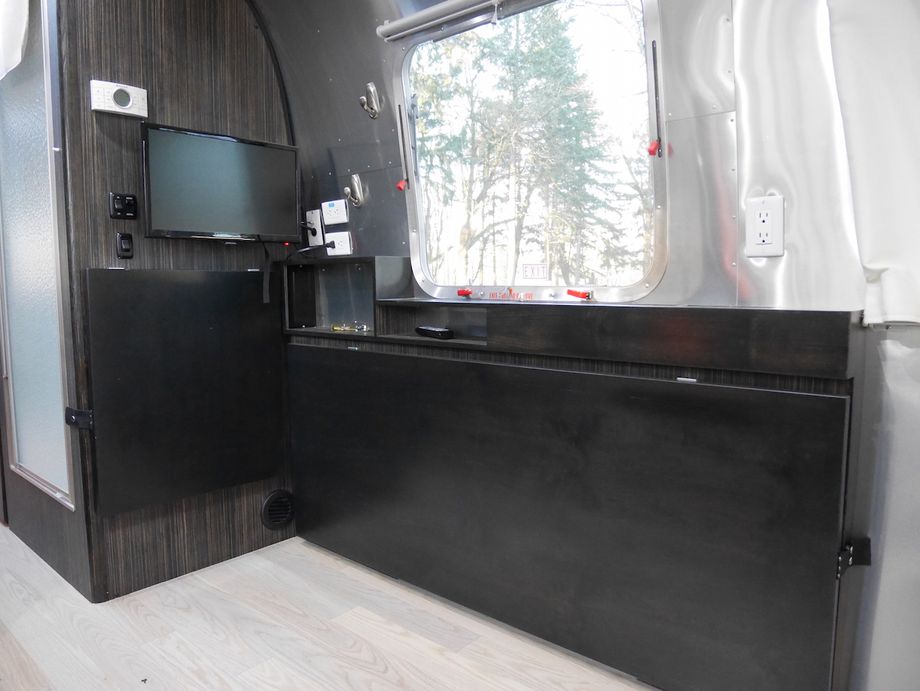 Though space is certainly tight—"you need to be compatible," says Fortson—the couple have found that they feel less like a lone pair of itinerant wanderers than new members of an under-the-radar mobile community. Even when they're parked for just a few days' time, they find themselves talking to their neighbors, much more so than they did in their old life.

"People go out of their way, and will offer a hand," says Fortson. "It's a very different thing than living in a condo in SoMa." 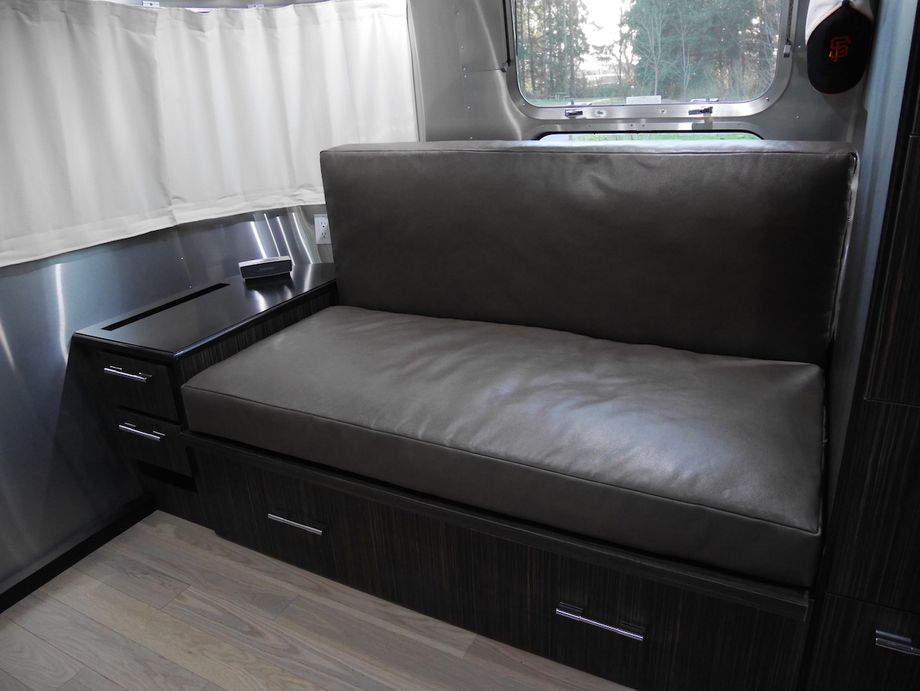 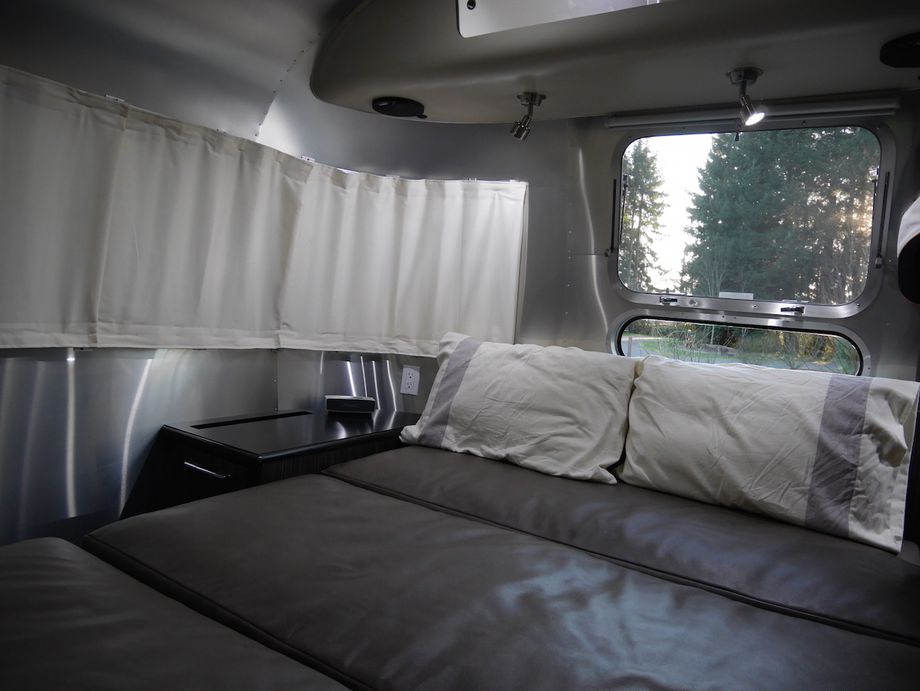 The couch converts into a bed.
Foursquare

View all stories in Tiny Homes